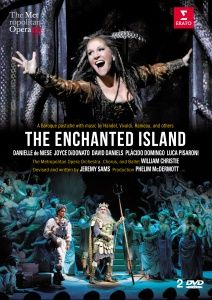 A showcase for – and a love letter to – a century of amazing music” is how the creator of The Enchanted Island, Jeremy Sams, described this spectacular operatic pasticcio of music by Handel, Vivaldi, Rameau, Purcell and others. Premiered at the Metropolitan in New York on New Year’s Eve 2011, it stars Joyce DiDonato, David Daniels, Danielle de Niese and Plácido Domingo, and is conducted by William Christie.

New Year’s Eve 2011 brought the world premiere at New York’s Metropolitan Opera of a spectacular and star-studded opera, The Enchanted Island. With a story based on Shakespeare’s The Tempest and A Midsummer Night’s Dream, it was not the work of contemporary composer, but instead drew on works by figures of the Baroque era – Handel, Vivaldi, Rameau, Purcell, Campra, Ferrandini, Leclair and and Rebel. Devised by the British writer, librettist and translator Jeremy Sams, the piece revived the 18th century tradition of the pasticcio, taking arias from a variety of different sources and setting them to a new libretto.

If the work itself was an exotic hybrid, the cast comprised thoroughbreds. The leading roles were assigned to Joyce DiDonato as the sorceress Sycorax, David Daniels as the magician Prospero, Luca Pisaroni as Sycorax’s son Caliban and Danielle de Niese as Prospero’s spirit aide Ariel, while, making a special appearance as King Neptune and rising from the watery depths of the ocean to the bubbling strains of Handel’s Zadok the Priest, was the indefatigable Plácido Domingo. Meanwhile, a cornucopia of rising talent filled the roles of the opera’s six young lovers – Lisette Oropesa, Layla Claire, Elizabeth DeShong, Anthony Roth Costanzo, Paul Appleby and Elliot Madore – while the conductor was that established master of baroque opera, and an essential figure in the Virgin Classics catalogue, William Christie.

The sumptuous production, designed by Julian Crouch and blending 18th-century theatrical techniques with advanced video projections, was by Phelim McDermott.

Handel is the dominant figure among the composers enlisted by Jeremy Sams, and The Enchanted Island repurposes numbers from his operas (including Alcina, Ariodante, Partenope, Semele, Tamerlano and Teseo), his oratorios (Hercules and Judas Maccabaeus) and his cantatas.

The New York Times described the opera as an ”inventive concoction” and a “fanciful, clever and touching pastiche”, while the Associated Press found it “irresistibly entertaining. It's a light-hearted romp with enough fizz to send a dozen champagne corks popping.” Among the praise for the singers, the New York Times spoke of David Daniels’ “transfixing blend of melting sound and forceful delivery and the Financial Times described how “Joyce DiDonato cackled, curled and soared with virtuosic flair in the bitchy-witchy spasms of Sycorax”; the Wall Street Journal felt that “the best moments came from Ms DiDonato, a tragic heroine adrift in a sea of comedy.”

Jeremy Sams, writing about The Enchanted Island in The Guardian in January 2012, a couple of weeks after its premiere, said: “On New Year's Eve, we opened at the Met. The production, by Phelim McDermott, is sumptuous, and the cast quite simply the finest in the world. As for the piece, well, many New Yorkers have taken it to their hearts. Purists have been suitably and predictably outraged. My only hope is that it should be seen for what it is: a showcase for – and a love letter to – a century of amazing music.”