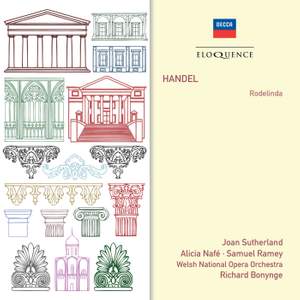 Rodelinda stems from a period of great creativity in Handel’s life, 1724-25, following hard on Giulio Cesare and Tamerlano. Although it met with only moderate success. One of its first revivals was via the German Handel Society in the 1920s, and then the Handel Opera Society revived it again, with a cast including Joan Sutherland, during the 1959 celebrations of Handel’s bicentenary. It was one of Sutherland/Bonynge’s later Decca operatic collaborations (1985) and their only Handel opera they recorded together.

[The recorded sound] is vivid, rather spacious … Dame Joan Sutherland produces generous quantities of golden tone … Nafé does [‘Dove sei’] very beautifully, gently yet with firm, well-formed tone. Her siciliano aria, where Bertarido despairs over his wife's supposed inconstancy, is particularly fine, as too is the intense accompanied recitative sung in a prison cell. Curtis Rayam shows a capable tenor in the role—one of the earliest important ones for a tenor—of the usurper Grimoaldo, with accurate singing in the rapid music and graceful phrasing in the attractive aria early in Act 2. His siciliano sleep song in Act 3 is affectingly done.