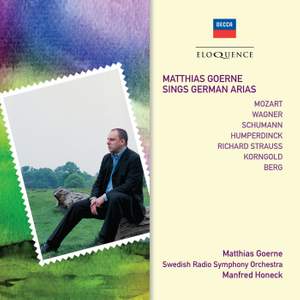 he is heart-rending in the Tannhauser extracts, dancing in the Korngold and moving as Berg's Wozzeck. — BBC Music Magazine, December 2012, 4 out of 5 stars More…

‘Operatic justice’, writes J.B. Steane in his informative and amusing note for this album, ‘is a law unto itself, and the baritone has been prominent among its victims. Unlucky in love, he is seen in the most favourable light as a father-figure and is otherwise all too often the villain of the piece. He may be manly but is rarely heroic. He will have his arias, his moments of glory, yet (uncannily, it must seem to him) their place is rarely at the centre of the opera, or for that matter, part of its last-act climax.’

Beginning with a bracket of Mozart arias, this colourful recital, recorded by Matthias Goerne in 2000, takes us through the terrains of mid- and late-19th century opera – Wagner, Humperdinck, Richard Strauss – to the early 20th-century with the moving ‘Mein Sehnen, mein Wähnen’ from Korngold’s Die tote Stadt, to two brief excerpts from Berg’s Wozzeck.

Matthias Goerne both works within the tradition and extends it. Like his predecessors, from Schlusnus to Fischer-Dieskau, he has developed his careers in opera and song side by side, though it is true that his fame and hitherto his work as a recording artist have centred less on opera than on Lieder and oratorio. His operatic recording debut was spotted by Gramophone magazine and described as ‘an impressive appearance’, as Prometheus in the large cast of Braunfels’s Die Vögel.

he is heart-rending in the Tannhauser extracts, dancing in the Korngold and moving as Berg's Wozzeck.

[Goerne’s] powerful Count [makes for] a strong, wilful presence … Faust's solo from the end of the second part of Schumann's work, the Spielmann's lovely piece from the close of the Humperdinck and the aria from Die tote Stadt are all sung with feeling and beauty, especially the Korngold, which is wholly beguiling, the real piece of gold in this programme.

This is a voice with a honeyed, mellow beauty right through its range, and considerable power when needed’