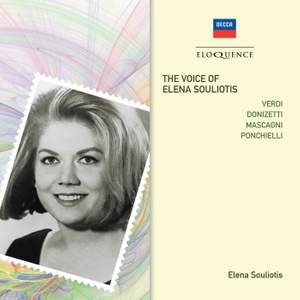 The Voice of Elena Souliotis

Everything I cherish in song and singing are embodied in her voice and her musical instincts — Harold Rosenthal, Opera

Elena Souliotis, hailed as a successor to Maria Callas, resembled a comet that flashed brightly across the operatic scene and was all too soon extinguished. With a lifelong love of horseriding and the outdoors, she often commented that she preferred animals to people. She spent much of her childhood in the spectacular garden of her parents’ home in Buenos Aires, only starting to train her voice when she was 16.While she was active, she recorded some memorable discs for Decca in the mid-1960s, most of the ‘plums’ of which are included here, recalling the excitement she then created. This collection, which first appeared on Decca’s ‘Grandi Voci’ series, includes a complete recital recorded by Decca; Santuzza’s aria ‘Voi lo sapete’ from the complete recording of Mascagni’s Cavalleria Rusticana, and items by Verdi and Ponchielli recorded at the same sessions under Silvio Varviso. Also included are one of her calling cards, Abigaille’s terrifying Act II scena ‘Ben io t’invenni’ from the complete and much-prized recording of Verdi’s Nabucco by Lamberto Gardelli, and an aria from Donizetti’s Anna Bolena.

As Alan Blyth who wrote the original liner notes remarks: ‘It is good to be reminded of her achievement by the reappearance of these interpretations and to hear again, in an age of too many mundane and orthodox singers, such a splendidly uninhibited artist, one who could rouse an audience to a frenzy through her singing and her acting.’