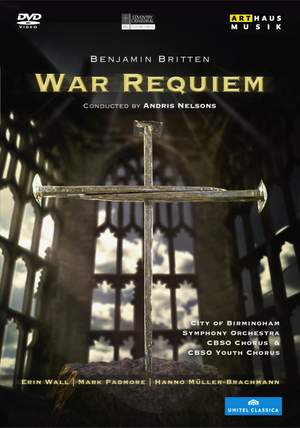 It is an irony that the strengths of the performance are exactly those aspects thought to have been the most damagingly weak at the premiere. The orchestral sound is well judged , combining atmospheric... — Gramophone Magazine, February 2013 More…

2012 brings the 50th anniversary of the premiere of Britten‘s War Requiem, one of the most powerful pacifist statements in music. The first performance took place in 1962 in the newly consecrated Coventry Cathedral, built alongside the ruins of the old cathedral, left as a sombre reminder of the wartime bombings. On 30 May 2012, 50 years to the day, Britten‘s masterpiece returns to the cathedral, performed as at the premiere by the City of Birmingham Symphony Orchestra and vocal soloists from three once warring nations.

The anniversary performance is conducted by the CBSO‘s Music Director, Andris Nelsons, featuring the Canadian soprano Erin Wall, English tenor Mark Padmore singing the role written for Peter Pears, and German baritone Hanno Müller-Brachmann. Choral forces are provided by the CBSO Chorus and Youth Chorus. Benjamin Britten (1913-1976) was commissioned to compose a work for the inauguration in 1962 of Coventry’s new cathedral, adjoining the old cathedral that had been bombed and nearly completely destroyed by the German Luftwaffe at the beginning of World War II in November 1940. The commission gave Britten complete freedom to choose the type of music to compose. He conceived of setting the traditional Latin Mass for the Dead interwoven with nine poems by the English poet Wilfred Owen, who had been killed in World War I. It has become one of the defining masterpieces of the twentieth century: a devastating meditation on the pity of war that is every bit as relevant today.

"The light-filled building was used to full effect. The CBSO Youth Chorus was positioned at the high altar beneath Graham Sutherland's Christ in Glory tapestry, all golden section and green resurrection...Padmore sang with visionary intensity. Müller-Brachmann maintained an unadorned simplicity of expression." Fiona Maddocks, The Observer, on the live performance

It is an irony that the strengths of the performance are exactly those aspects thought to have been the most damagingly weak at the premiere. The orchestral sound is well judged , combining atmospheric resonance with the right amount of clarity...The CBSO forces, orchestra and chorus alike, make handsome amends for the shambles reported at the premiere.

The War Requiem was commissioned for the dedication of Coventry Cathedral which provides a dramatic setting for this 50th anniversary performance by the CBSO under Andris Nelsons. Mark Padmore is characteristically eloquent in the tenor role, with German baritone Hanno Müller-Brachmann (a pupil of Fischer-Dieskau, who sang the first performance) and the Canadian soprano Erin Wall rising to the same high standard.