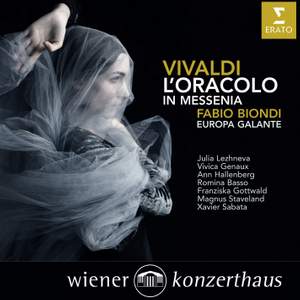 Biondi has assembled an impressive cast, with outstandingly fine contributions from [Hallenberg and Genaux]. It is Julia Lezhneva (Trasimede), though, who steals the show with dazzling coloratura... — BBC Music Magazine, Christmas 2012, More…

Virgin Classics present the world-premiere recording of L’Oracolo in Messenia, an opera prepared by Vivaldi for Vienna and now reconstructed by Fabio Biondi. Biondi leads this triumphant performance, which opened the 2011 Resonanzen festival in the Austrian capital with a high-powered cast including Ann Hallenberg, Vivica Genaux and rising soprano Julia Lezhneva.

Vivaldi revised L’Oracolo in Messenia for Vienna in 1740 after its premiere in 1738 in Venice and now Vivaldi expert Fabio Biondi has reconstructed the work from literary and musical sources – notably a libretto recently discovered at the Library of Congress in Washington, DC. This musicological feat follows the example Biondi set with two other Vivaldi operas recorded for Virgin Classics, Bajazet and Ercole sul Termodonte.

Vivaldi hoped for performances of the work in Vienna during Carnival in1741, but in October 1740 the Austrian Emperor, Charles VI, died suddenly and Austria’s theatres were closed for a year of mourning; so Vivaldi’s plans came to nothing and he himself died in Vienna in 1741, alone and poor. L’ Oracolo in Messenia was finally staged in the city in 1742 at the city’s Kärntnertor Theatre, starring Anna Girò, Vivaldi’s favourite prima donna, as Queen Merope.

Appropriately enough, this recording was made in Vienna. It captures the opening performance of the 20th season of the prestigious Resonanzen festival of early music, which takes place at the city’s Konzerthaus. The impressive cast comprises soprano Julia Lezhneva, mezzo sopranos Ann Hallenberg (as Queen Merope), Vivica Genaux, Romina Basso and Franziska Gottwald, counter tenor Xavier Sabata and tenor Magnus Staveland. Fabio Biondi leads his own ensemble, Europa Galante, from the violin. The performance was greeted with a standing ovation and the media were lavish in their praise; indeed the Wiener Zeitung said that: “the festival could not have launched its 20th anniversary in more triumphant fashion”.

Biondi has assembled an impressive cast, with outstandingly fine contributions from [Hallenberg and Genaux]. It is Julia Lezhneva (Trasimede), though, who steals the show with dazzling coloratura and immense tonal precision...There is much to enjoy in the singing and playing alike.

The Sinfonia (from Griselda) typifies the vibrant elan which we have come to expect from Europa Galante: crackling fast music that packs a horn-fuelled punch...the opera's explosive dramatic climax is Ann Hallenberg's performance of Giacommelli's intense scene for Merope

simply outstanding...Europa Galante give a spirited, vivacious interpretation, led magnificently by their founder...Gottwald makes a fabulous Etolian ambassador and young soprano Julia Lezhneva is simply outstanding as Trasimede...Genaux is usually exceptionally good but here, she achieves greatness. I have never heard her sing so well...I would give it ten out of ten and I intend to listen to it over and over again.

The performance...is an object lesson in how to do this type of work. Biondi's conducting is by turns witty, sexy and full of pathos...Fabulous, every second of it.

This L’Oracolo is Fabio Biondi’s artful reconstruction of the Vienna version, based on his assumption that Vivaldi’s score was a pasticcio and...that it drew heavily on Giacomelli’s hit 1734 opera, La Merope...the music is often enthralling, with several spectacular showpiece arias (though regrettably few tender moments), and both the playing and singing (by a stellar cast) crackle with energy.

the individual arias and the final chorus are uniformly attractive. The cast contains three of the world's finest Baroque mezzos, with contrasting, expressive individual timbres..Lezhneva's technically astounding Trasimede made me begin to understand the hype this very young singer has occasioned...Biondi and his Europa Galante forces flourish in this kind of music; there's much to enjoy in the way of instrumental detail.