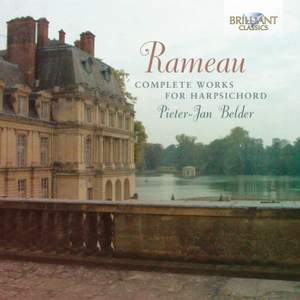 Rameau: Concert No. 1 in C minor

Rameau: Concert No. 2 in G major

Rameau: Concert No. 3 in A major

Rameau: Concert No. 4 in B flat major

Rameau: Concert No. 5 in D minor

Pieter-Jan Belder has made over 100 recordings, including the complete Telemann Tafelmusik for Brilliant Classics, and this set is part of his project to record all of Rameau’s keyboard music.

On this 3CD set are Rameau’s great sets of pieces for keyboard – Pièces de Clavecin en Concerts of 1741, the Pièces de Clavecin of 1705 and 1724, and the Nouvelle Suites de Pièces de Clavecin of 1726. In the centuries that have passed since his death in 1764, he has been consistently praised by composers such as Debussy (‘A composer I cannot recommend strongly enough is Rameau’ he wrote in 1903), Hindemith, Tartini, D’Indy, and Gluck – what a variety! All wrote of their indebtedness to him, and acknowledged his influence.

Rameau’s 65 keyboard works date from 1706 to 1741, and were published in four volumes. Some of the books include music for small ensemble, for example the 1741 Pièces de Clavecin en Concerts included on CD1 of this set, as well as for solo keyboard. As the four books span Rameau’s creative life it is possible to chart the development and maturity of his style.