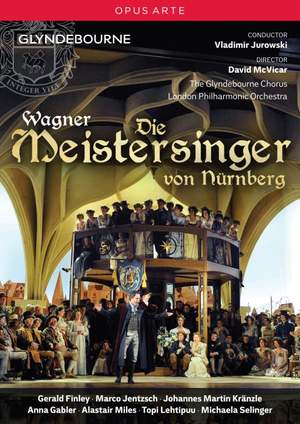 McVicar's staging stokes the glow of Meistersinger's humane heart...and above all he reminds us that this is an opera about youth and self-discovery. Gerald Finley's pivotal Sachs relish[es]... — BBC Music Magazine, December 2012, 5 out of 5 stars More…

English-speaking audiences have always found Die Meistersinger to be a life-enhancing celebration of wisdom, art and song. So it proves in David McVicar's production – the first at Glyndebourne – which is updated to the early-19th century of Wagner's childhood. At the centre of a true ensemble cast is Gerald Finley, a 'gleamingly sung', 'eminently believable' Sachs (The Independent on Sunday), supported by the dynamic conducting of Vladimir Jurowski which, like McVicar's production, uses Glyndebourne's special intimacy to bring sharp focus to bear on the subtlety of Wagner's musical and dramatic counterpoint.

‘‘McVicar has put on a great show with style, intelligence and insight’’ The Telegraph

‘‘Musically, it was judged faultlessly for the scale of the theatre by Vladimir Jurowski, who conjured playing of mercurial clarity – not the first words one would normally choose for this gargantuan score – from the London Philharmonic Orchestra, sustained with unfailing vigilance and concentration.’’ The Guardian

McVicar's staging stokes the glow of Meistersinger's humane heart...and above all he reminds us that this is an opera about youth and self-discovery. Gerald Finley's pivotal Sachs relish[es] this intensely verbal role with a Lieder-singer's skill and beauty...Jurowski completes the ensemble with a beautiful account, unfolding the story with pace and details...Together they make the immense performance the most uplifting performance I can recall

The camerawork – mostly close-up – is superb, focusing on the intimacy of the Glyndebourne stage and the visual expressiveness of a young cast. Vicki Mortimer’s Biedermeyer sets are notably more handsome on film than in the theatre, and the performance (captured late in the inaugural run) breathes a general air of wellbeing

Jurowski handles the score with seriousness and pomp...Finley has the role of Hans Sachs massively in focus, both musically and dramatically. He is compulsively watchable throughout...McVicar's production is best at one-to-one emotional confrontations but rather loud and messy in ensemble scenes...it would be mealy-mouthed not to notice the commitment and enthusiasm steaming off the stage, while Finley's work has to be seen and heard