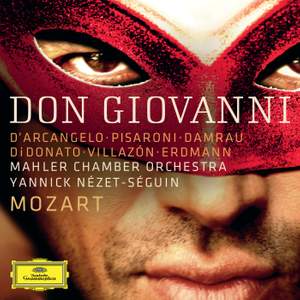 D'Arcangelo's full bass allows this Giovanni to register as a vocal heavyweight, a dominant male who's also an expert seducer...Nézet-Séguin supplies plenty of character, with effective tempos... — BBC Music Magazine, Christmas 2012, 4 out of 5 stars More…

Yannick Nézet-Séguin’s project cycle of Mozart’s major operas on Deutsche Grammophon gets off to a scintillating start with a starrily-cast take on ’Il dissoluto punito’, with Ildebrando d’Arcangelo as the eponymous libertine, and Diana Damrau and Joyce DiDonato as Anna and Elvira.

This thrilling recording around concert performances at the Baden-Baden Festspielhaus is set to be a milestone in at least two ways:-

It marks the beginning of an extended Deutsche Grammophon collaboration with rising star Yannick Nézet-Séguin – the young French-Canadian maestro - “surely the most exciting talent of his generation” (Edward Seckerson, The Independent, January, 2011) who has already been celebrated from the Metropolitan Opera House New York to Royal Opera House Covent Garden, La Scala Milan and the Salzburg Festival.

It is the first of a new Deutsche Grammophon cycle of Mozart’s seven main operas in collaboration with Festspielhaus Baden-Baden, Universal Music Arts & Entertainment, with the generous and kind support of Rolex and an enthusiastic advocate – Rolando Villazón - in love with Mozart!

A truly remarkable cast of world opera stars comes together for a breath-taking concert performance of Mozart’s Don Giovanni, with Mahler Chamber Orchestra under the baton of Yannick Nézet-Séguin.

D'Arcangelo's full bass allows this Giovanni to register as a vocal heavyweight, a dominant male who's also an expert seducer...Nézet-Séguin supplies plenty of character, with effective tempos and dramatically conceived music-making...this is definitely one of the best accounts of the opera to appear in a while.

[Nézet-Séguin] combines the well-defined articulation of an historically informed approach with the full-bodied sound of a modern orchestra...The most exciting and consistently well-sung Don Giovanni to appear for several years, this set is strongly recommended.

Nézet-Séguin proves himself to be a superb Mozartian...his pacing can't be faulted...Erdmann confirms the promise of her recital disc...As for Joyce DiDonato, you would have to go a long way to hear such superb breath control in 'Mi tradi'...Villazon was not an obvious choice for Don Ottavio: full-on Latin passion rather than sculptured, north European elegance...Pisaroni really acts with his voice without sacrificing beauty of tone.

this Don Giovanni is more distinguished than the sum of its parts thanks to Nézet-Séguin's powerful and dynamic conducting of the Mahler Chamber Orchestra, which plays with terrific flair and élan...For fans of these particular singers, the set will be a must-buy, but even for the sceptical there is plenty to challenge and stimulate here, and the best of the soloists - Pisaroni, DiDonato, intermittently D'Arcangelo - are outstanding.

d’Arcangelo’s virile, attractively rough-round-the-edges bass-baritone sounds better than ever before on disc...The opera’s not short on terror even before the supernatural rears its head, this has to be one of the most frightening Giovannis I’ve ever heard...Both the ‘Donnas’ are thrillingly sung, full of nuance and vocal drama that leaps out of the speakers.

Nézet-Séguin makes a strong showing here, a dramatic conductor with a foot in both the big Romantic and the “historically aware” Mozartian camps...[Villazon] is in good voice, but his style is anachronistic and lachrymose. Ildebrando d’Arcangelo is a saturnine, bassy Don, but I wish he had swapped roles with Luca Pisaroni’s lithe, witty Leporello.

[D'Arcangelo] brings a devilish charm to the anti-hero's reckless libertinism...The climax of the First Act displays Nézet-Séguin's undoubted skill in balancing the multitude of elements...with a lightness of touch that doesn't betray the lowering clouds gathering about Don Giovanni's future.

There’s too much crooning and pitch-bending from d’Arcangelo, in particular. However, DiDonato’s Mi tradì is sublime and Mojca Erdmann’s gorgeously embellished Zerlina is delicious.