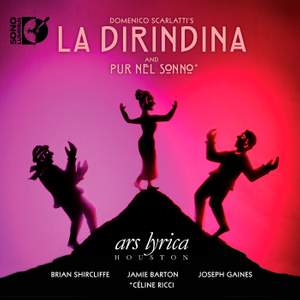 Sono Luminus is proud to release this latest breathtaking project from Ars Lyrica, Domenico Scarlatti’s La Dirindina and Pur nel sonno. The package is a 2-disc set, containing a Blu-ray Surround Sound disc as well as a standard CD.

The story of La Dirindina concerns a wily but gifted young singer, Dirindina (Jamie Barton), and her teacher Don Carissimo (Brian Shircliffe), whose interest in his pupil is more than a little untoward. Dirindina’s independent spirit and her ability to sing (when she wants to) annoy Don Carissimo, who is further vexed by the appearance of Liscione (Joseph Gaines), a famous castrato who brings some surprising news: the Milan theatre wants to engage Dirindina as its prima donna. Don Carissimo flies into a rage, stammering his way through a highly amusing and forward-looking aria, only to see that his pretty pupil is now flirting openly with the castrato.

Part II opens with the unctuous Liscione plying Dirindina with a little minuet, which manages simultaneously to flatter the young singer’s ego while lampooning the fashionable but shamelessly sentimental manners of the aristocracy. Dirindina responds with perhaps the oddest aria in the work, full of syncopations and serpentine melodies that cheekily invoke various bodily fluids, with which she promises to seduce the Milanese public. The ensuing "play within a play", a mock enactment of the tragic Dido’s rejection of the feckless Aeneas, is witnessed by Don Carissimo, who fails to get the joke and thinks that his ward is not only with child but ready to commit suicide. As with all good comedies, the joke’s on him: the finale is both outrageous and touching, as the capon and the hen are joined in hand by a thoroughly deceived old man.

The story of Pur nel sonno, showcasing soloist Céline Ricci, is delivered from the unlucky suitor’s point of view, and from the outset, the mood is dark: an Introduzione in two parts - something one might expect only at the head of a full-length opera or oratorio - is by turns aggressive and pensive. The sinewy first aria introduces a world-weary lover, one rejected by the unattainable Phyllis but unable to forget her, even in sleep; his passion remains sadly one-sided. A highly dramatic recitative follows, as the protagonist’s dream veers from lovely visions to fear and shame. His final realization - that he’ll never be free again - is given full vent in a tour-de-force concluding aria with abundant vocal fireworks.

Founded in 1998 by harpsichordist and conductor Matthew Dirst, Ars Lyrica Houston offers world-class performances of music from the 17th and 18th centuries on period instruments. This CD follows their previous release on Sono Luminus, Marc’ Antonio e Cleopatra (DSL92115) which was hailed by Early Music America as “a thrilling performance that glows in its quieter moments and sparkles with vitality,” and was nominated for a GRAMMY® Award for Best Opera 2011.