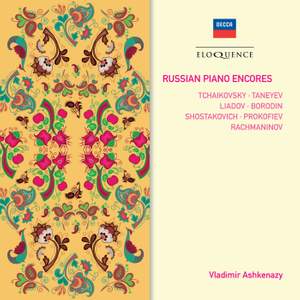 Shostakovich: Dances of the Dolls

Shostakovich: The Golden Age, Op. 22b

No. 2, Prelude in C-Sharp Minor

Many European countries have vied with one another in claiming the largest number of piano virtuosos. No one would dispute, though, that Russia has generated more than its share. The so-called ‘Russian piano school’, which originated in the 1800s with brilliant performers such as Alexander Siloti and brothers Anton and Nikolai Rubinstein, continues to produce first-class pianists, and to influence performance styles and keyboard virtuosity all around the world.

Given Russia’s richness in superstar pianists, it is not surprising that Russian composers have composed extensively for the piano. Some of the composers represented in this collection were impressive pianists in their own right, and they composed music designed to display their own technique and artistry. Others were more modestly gifted as performers, but still composed idiomatically for the piano.

This collection brings together recordings by Vladimir Ashkenazy spanning some 40 years, from November 1963 (the three Rachmaninov Études-Tableaux) to March 2004 (the Kocsis transcription of Vocalise). Some of them appeared as fillers for bigger works – for instance, the Études-Tableaux were coupled with the 1964 recording of Rachmaninov’s Piano Concerto No. 2 with Kyril Kondrashin, one of Ashkenazy’s earliest recording for Decca, and his first solo recording for the label. Tchaikovsky’s Dumka and the pieces by Taneyev, Liadov and Borodin were recorded in January 1983 and issued on LP as a coupling for his digital recording of Mussorgsky’s Pictures at an Exhibition. The two pieces from Prokofiev’s Romeo and Juliet were taped in 1968 as couplings for the composer’s Eighth Piano Sonata.