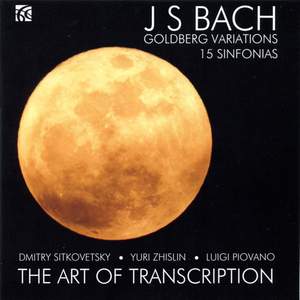 The Art of Transcription

It's over a quarter of a century since Dmitry Sitkovetsky made his string trio transcription of the Goldbergs, recorded here with Romantic gusto alongside the Sinfonias. — BBC Music Magazine, Christmas 2012, 4 out of 5 stars More…

Dmitry Sitkovetsky is an artist whose creativity defies categorising. He has built up an active and successful career as a violinist, conductor, arranger, chamber musician & festival director. Sitkovetsky has performed as a soloist with a number of the world’s leading orchestras including the Berlin, New York and LA Philharmonic Orchestras, Leipzig Gewandhaus, Concertgebouw Orchestra, all of the major London orchestras, NHK, Chicago, Philadelphia and Cleveland orchestras. He has performed at a number of high-profile festivals including Salzburg, Lucerne, Edinburgh, Verbier, Istanbul, Newport, Festival del Sole (Napa Valley) and the IMG Tuscan Sun Festival.

In 2003, he was appointed Music Director of the Greensboro Symphony Orchestra, a position he currently holds with great success.

It's over a quarter of a century since Dmitry Sitkovetsky made his string trio transcription of the Goldbergs, recorded here with Romantic gusto alongside the Sinfonias.

This is not “Bach For Relaxation”, but a high-octane energy booster...It all starts from the Aria: vibrant, full-voiced, very expressive yet with a certain “white” delicacy. The variations follow without pauses, which creates a forward-rolling feeling of agitation and delight...the recording quality is excellent; the string lines appear like bright electric threads over black velvet.