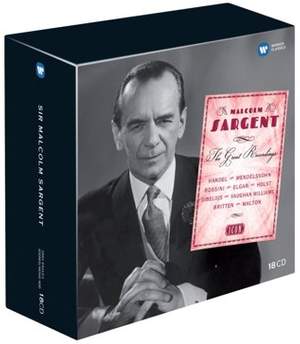 Arne: God save the Queen

Malcolm Sargent’s reputation as one of the great popularisers of classical music in Britain arose not only through his long association with the Henry Wood Promenade Concerts (1947–67), but was in evidence much earlier through chief conductorships of the Hallé (1939–42), Liverpool Philharmonic (1942–8) and BBC Symphony Orchestras (1950–57).

By the time he became a fixture at the Proms in 1947 (now as Sir Malcolm: he was knighted in 1947) his was one of the best-known names in England. In personality, showmanship and energy he was ideal for the nightly concerts.

Sargent amassed a commercial discography of imposing breadth and variety. His first HMV recordings date from as far back as 1924 with excerpts from Vaughan Williams’s opera Hugh the Drover captured by the pre-electric acoustic process, and his career with the company ended in 1966 with Walton’s First Symphony.

Sargent’s wide-ranging repertoire extended from the Handel oratorios on the one hand to the Gilbert and Sullivan operettas on the other: ‘Messiah and The Mikado have been the twin pillars of my career,’ he once joked; it was hardly true, though his inspirational handling of choral bodies ensured that Handel’s oratorios and others such as Mendelssohn’s Elijah would be indelibly associated with him all his life.