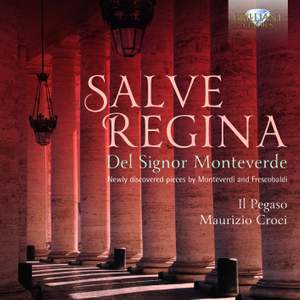 Claudio Monteverdi and Girolamo Frescobaldi were two of the most influential musical figures in 17th-century Italy; while the former's boundary-pushing madrigals, operas and sacred works changed the course of Baroque vocal music irrevocably, the latter was one of the first – and most prominent – composers to devote serious attention to composing for the keyboard.

This new recording celebrates the influence that these two composers continue to exert over performers and audiences today -- and the fascination that their music inspires -- through a selection of motets and instrumental pieces, performed with precision and authority by Il Pegaso and Maurizio Croci. Of particular interest are a handful of new discoveries: three Marian antiphons by Monteverdi, preserved in a music print held at the Biblioteka Uniwersytecka in Wroclaw, Poland, and pieces drawn from a recently-unearthed notebook of Frescobaldi's, including early stages of extant works.

With the addition of several better known compositions, this intriguing collection illuminates some less familiar aspects of both composers' oeuvres, and places recent musicological discoveries within reach of listeners. In their debut recording, the new ensemble Il Pegaso, led by Maurizio Croci, deliver performances invested with passion and expertise.

- A rare and exciting opportunity to hear recently-discovered pieces by Monteverdi and Frescobaldi, performed by experts in 17th-century Italian music.