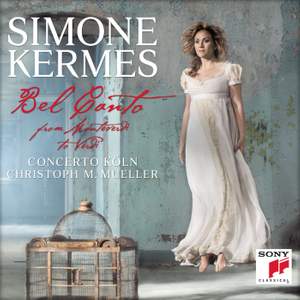 Bel Canto from Monteverdi to Verdi

The programme is expressly devised so that Kermes can shed new light on 19th-century vocal writing, applying the stylistic approaches she has developed in music of earlier eras: her trademark... — BBC Music Magazine, February 2014, 4 out of 5 stars More…

With her new album Simone Kermes presents her dedication to bel canto. Despite the title the Baroque soprano hasn’t suddenly switched from one voice type to another but is simply following her own interpretation of this term, arguing that bel canto is “inconceivable without reference to the Baroque tradition”.

Simone Kermes has received a number of international awards for her solo albums, such as the annual prize of the Deutsche Schallplattenkritik, the Diapason d`Or, Midem Award, Choc Le Monde de la Musique, Gramophone magazine’s Disc of the Month and the Echo Prize. For her CD entitled Colori d`amore she was the winner of the Echo Prize in the highest category, Female Singer of the Year, in 2011. In 2012 the Munich Abendzeitung awarded Simone Kermes its Star of the Year Award, and in April 2013 she received one of Russia’s highest cultural awards, the Golden Mask, for her performances as Fiordiligi in Mozart’s Così fan tutte at the Tchaikovsky State Academic Theatre in Perm.

The programme is expressly devised so that Kermes can shed new light on 19th-century vocal writing, applying the stylistic approaches she has developed in music of earlier eras: her trademark blend of dazzling technical accomplishment, vital imagination, care over detail and a willingness to take risks...an unconventional but special addition to any Italian opera collection.

What can she bring to this repertoire? As you would expect, she's good at 'the runs' and the high notes. However, she simply doesn't have the weight or dark colour to frighten us...or inspire us...The final Monteverdi item is heavenly, both in itself and in reminding us how strong Kermes is on home turf.