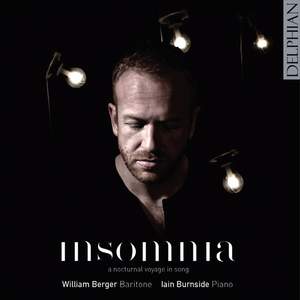 Insomnia: A nocturnal voyage in song

Berger's grainy baritone is pleasing more than awe-inspiring...But he communicates with keen enthusiasm, and his word-lively Mozart Abendempfindung immediately draws the listener in to this artfully... — BBC Music Magazine, February 2013, 3 out of 5 stars More…

For his solo debut on disc, William Berger has devised an ingenious sequence of 17 songs describing a sleepless night experienced by a man who reflects on his love for an unnamed woman.

From Viennese classicism to fin-de-siècle Romanticism, shadowy English pastoral to the contemporary worlds of Richard Rodney Bennett and Raymond Yiu, this wide-ranging programme is brought to nuanced life by this outstanding young baritone. The indefatigable Iain Burnside provides lucid and imaginative accompaniment. Together, their performances vividly capture the full gamut of nocturnal emotions.

A graduate and Associate of the Royal Academy of Music in London, Berger is a former member of the Young Singers Programme at English National Opera. Recent engagements include singing Aeneas to Susan Graham's Dido, on tour in California, and his recital debut at the Lucerne International Festival.

Pianist Iain Burnside has forged a worldwide reputation through his commitment to song repertoire and his collaborations with leading international singers.

Berger's grainy baritone is pleasing more than awe-inspiring...But he communicates with keen enthusiasm, and his word-lively Mozart Abendempfindung immediately draws the listener in to this artfully selected and ordered programme. With Iain Burnside as accompanist, there are light-filled starry nights aplenty

Berger has a warm, resonant baritone and an hour spent in its company is a pleasurable experience … the partnership between Berger and Iain Burnside yields some fine performances.

Much in this recital gives satisfaction and pleasure. First of all comes the sound of the voice, warm, full, smoothly emitted and steady. One notes too the use of legato, enabling lines and notes to flow

Berger is a gem of a singer

[Burnside] is unfailingly sensitive and powerfully communicative throughout. The dreamy undulations of Mandoline are a knockout, as is the gently suggestive accompaniment to Wolf’s Um Mitternacht, to name but two examples.

Burnside handles everything with aplomb and insight'

His tone is beautiful, his technique immaculate. He does extraordinary things with breath control in Oh! Quand Je Dors and Wolf's Um Mitternacht, and his sense of line is exceptional...Iain Burnside is wonderfully responsive to his shifts in mood and style. An idiosyncratic disc, but very fine.

[the programme] plays out its chronological narrative – songs depicting specific hours of a sleepless night – with logical and psychological inevitability...Berger sustains a magnetic affection throughout the varied sequence, aided by Iain Burnside’s deft pianism.

You’ll be beguiled by Berger’s voice and entranced by the more left-field musical choices...Songs by Wolf and Liszt dominate post-midnight, and after Morgen we get a couple of encores, including a tiny Gounod number sufficiently breezy to banish the introspective mood and leave one feeling invigorated, not depressed.