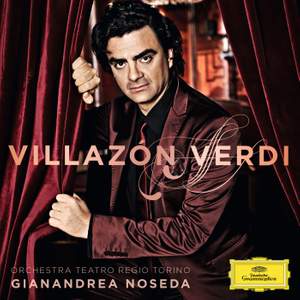 Villazon has made an interesting choice of programme...His sense of style and occasion are as unbridled as ever, the top of the voice not quite as free as it once was...[Noseda] has the taste... — Gramophone Magazine, January 2013 More…

Released to coincide with Verdi’s anniversary year (1813 to 2013.) A unique and carefully-crafted personal selection of Verdi arias and songs that takes us on a musical journey from Verdi's earliest compositions 1838 to the very last he wrote for the tenor voice: the beautiful aria from Falstaff "Dal labbro il canto estasiato vola" 1893

Recorded in Turin, with the world-class Orchestra del Teatro Regio di Torino, and under the direction of award-winning conductor, Gianandrea Noseda.

Rolando owes his international breakthrough to Verdi: he has made opera history in La Traviata, Rigoletto and Don Carlo, as well as being a celebrated interpreter of the breath-taking Requiem. This is Rolando’s own personal tribute to one of history’s most popular composers.

Villazon has made an interesting choice of programme...His sense of style and occasion are as unbridled as ever, the top of the voice not quite as free as it once was...[Noseda] has the taste not to try to make a whole opera out of each aria.

It is good that the voice seems to have returned, but I find it disappointing that Villazon has not used it more imaginatively in this recital...When a solid tone and a ringing voice are needed, Villazon fits the bill: his top notes are not puny efforts but peal out.

Throughout, the greasepaint in Villazón’s singing finds a match in the fiery dash of the Orchestra Teatro Regio Torino and its conductor Gianandrea Noseda, always strong on drama, rhythm and colour.