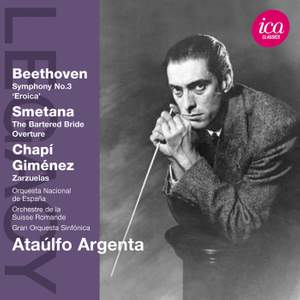 Before he was killed in a freak accident, aged only 44, Ataúflo Argenta (1913–1958) was the foremost Spanish conductor of his generation and on the verge of a major international career. After studying in Germany, he founded the Madrid Chamber Orchestra in 1946 and in 1947 was appointed chief conductor of the Orquesta Nacional de España which quickly grew into a major ensemble. Argenta also established himself in Paris with the Paris Conservatoire and French National Radio orchestras and made a considerable number of recordings in London for Decca. He was closely associated with Ernest Ansermet and the Suisse Romande Orchestra, the former seeing him as a potential successor.

Argenta was not associated with Beethoven, yet this live ICA recording of the ‘Eroica’ with the Orquesta Nacional shows him as an exciting interpreter. This is the first time this recording has been published outside Spain, and it benefits from excellent remastering. Similarly, Smetana’s Bartered Bride Overture with the Orchestre de la Suisse Romande recorded live is also issued for the first time outside Spain. Argenta never recorded either of these works commercially in the studio.

The fill-ups consisting of zarzuela orchestral preludes by Chapí and Giménez have never been issued on CD before and reveal Argenta’s unique affinity with these Spanish composers. The Beethoven and Smetana are important additions to Argenta’s discography.