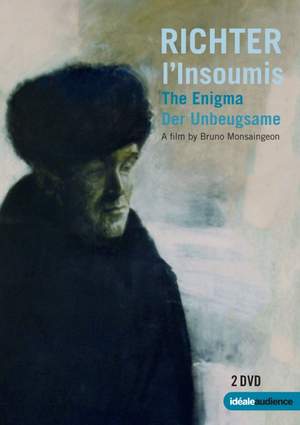 A film by Bruno Monsaingeon

One of the most famous classic documentaries about Sviatoslav Richter available on DVD again!

The film is entirely "narrated" by Sviatoslav Richter who we get to know as both musician and pianist, particularly through his reading of extracts from his “musician’s diary”.

An interview with his wife, the singer Nina Dorliac rounds out the narrative.

A particularly painful family history; an unconventional apprenticeship in Odessa; a very particular vantage-point of Stalin´s funeral; forbidden to perform in the West until 1961, the bitterness of a triumphant American tour; a scathing view of the musical milieu and its performing artists.

In the two years preceding his death on August 1st 1997, the Great Russian pianist Sviatoslav Richter agreed to a no-holds-barred conversation about his life and career, which was conducted in the service of music, regardless of all conventions.

Intercut with a great deal of archive footage and rare or unpublished music material, this is the story of a turbulent life and era.