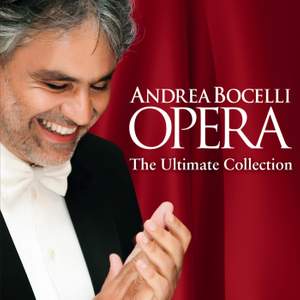 Opera - The Ultimate Collection showcases Bocelli’s vibrant personal journey through the world of opera. The collection features the most popular tenor arias from well-known operas such as La Boheme, Tosca, La Traviata, Madame Butterfly and Romeo & Juliet and a brand new recording of the much celebrated “Nessun Dorma!” from Puccini’s Turandot is included; a signature piece for Bocelli as it was for his mentor Luciano Pavarotti.

The album draws on arias which inspired Bocelli throughout his career, from his first memory of opera, Verdi’s La donna e mobile to his newest recording of the great aria Donna non vidi mai from Puccini’s Manon Lescaut. It also includes Bocelli’s personal favourites from the masterpieces of Puccini and Verdi, as well as the very best of French opera, featuring arias by Massenet, Gounod and Bizet.

Bocelli is the world's biggest selling classical artist - 80 million records sold and counting. The collection will be accompanied by a simultaneous release of the complete Manon Lescaut opera.