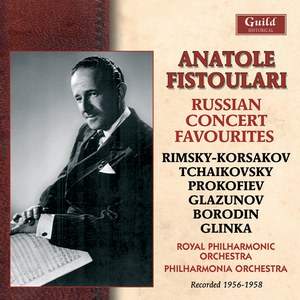 Rimsky Korsakov: Procession of the Nobles (from Mlada)

Glinka: Valse-Fantaisie in B minor for orchestra, G. ii213

This rare collection of Russian Concert Favourites is one of the few CDs to be released marking the excellence of the fine Ukranian-born conductor Anatole Fistoulari. If anyone was born to conduct, it was Fistoulari - his father was a famous conductor and Anatole conducted his first concert at the age of seven (!) in a programme which included Tchaikovsky's 'Pathetique' Symphony! As an adult, he became world-famous through many recordings and concert appearances, yet it was in Russian repertoire that he excelled. He also married Mahler's daughter, Anna. This unique collection has very famous pieces alongside quite rarely heard items, yet each one is shot through with an understanding and quality of performance that betoken a master conductor, from the thrilling account Rimsky-Korsakov's 'Procession of the Nobles' with which the programme opens, to the power and drama of Glazunov's symphonic poem 'Stenka Razin', with which it ends. The two great British orchestras are the Royal Philharmonic and the Philharmonia. A most important and valuable collection of popular Russian orchestral music.