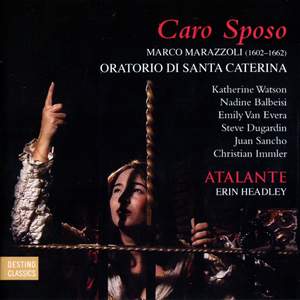 Marazzoli moves from recitative to arioso to aria in the manner of Monteverdi and - in a performance as good as this, anyway - he holds one's attention throughout...Emily van Evera and Steve... — Gramophone Magazine, October 2012 More…

In Lamentarium, the first recording of our Reliquie di Roma series, we laid the four cornerstones for a 17th-century ‘Roman’ city of ladies with the tragic laments of Helen of Troy, Queen Artemisia, Mary Magdalene and the Virgin Mary. In this second recording we raise an edifice to St Catherine. Our ‘martyr drama’ in the form of an oratorio continues from here in rich and elaborate baroque style, with prolonged and agonising suffering and torture ultimately leading to Catherine’s sublime and victorious death. Lelio Orsini, one of Rome’s most eminent librettists, vividly conveyed the narrative in elegant poetry, which Marco Marazzoli dramatically and extravagantly enhanced in the full-scale Oratorio di Santa Caterina.

It was in 1975 that I first encountered Pasquini’s oratorio Cain e Abel in the Vatican Film Library at St Louis University (USA), when a fellow student showed me a copy of the manuscript. This chance discovery propelled my lifetime career as a lirone player, but more importantly fuelled an enduring interest in the instrument’s extraordinary repertoire and its fascinating cultural ambience. Thirty-five years later I have finally been able to realise the dream of recording, staging and filming a considerable amount of Rome’s vast and extraordinary repertoire for our series Reliquie di Roma. And in this second recording, it is with great satisfaction that we can finally share Cain’s lament with the musical public.

Marazzoli moves from recitative to arioso to aria in the manner of Monteverdi and - in a performance as good as this, anyway - he holds one's attention throughout...Emily van Evera and Steve Dugardin make a cheery Faith and Hope...Katherine Watson is everything one could wish for and Atalante play beautifully.

[Watson] portrays St Catherine perfectly, with an impressive account of the recitatives in truly speechlike manner. The beauty and sweetness of her voice is suitable for her arias whose expressive character is fully explored. Christian Immler is very convincing as emperor Massimo, and one can hear his increasing anger about St Catherine's uncompromising stance.

Some of it may be routine, but performed as here with great care and the lightest of touches under director Erin Headley, the best is strikingly beautiful, especially Piango la tua Sventura, the lament accompanied by a lirone that is sung by a Roman soldier just before Catherine is put to death.