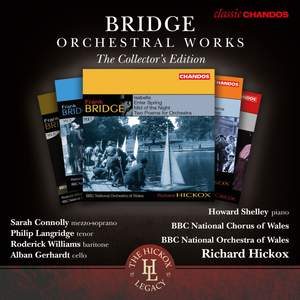 No. 5, Entr'acte between Acts II and III. Moderato

Bridge: There Is a Willow Grows aslant a Brook, H. 173

No. 1, I praise the tender flower

No. 2, Thou didst delight my eyes

Sally in Our Alley

The complete orchestral works by Frank Bridge are here released in an attractive six-disc box for the first time, as part of the new Hickox Legacy commemorative series on Chandos Records, leading up to (and continuing beyond) the fifth anniversary, in Nov 2013, of the conductor’s untimely death. The box is released on the Chandos Classics label at Mid-Price – 6 CDs for the price of 4.

A couple of orchestral works aside, the repertoire of Frank Bridge was largely ignored until Hickox embarked on the complete cycle of his orchestral music, which revealed to the world what a remarkably varied and imaginative composer he was.

All of Bridge’s orchestral music is about something: there are nature-inspired tone poems, such as The Sea and Enter Spring; there are war-inspired works such as Oration and the Overture Rebus; and there are those pieces with a more ambiguous or elusive ‘emotional’ programme, such as Dance Poem and Phantasm.

Listening to this comprehensive Chandos set, Bridge’s position as a shadowy transitional figure comes into sharper focus, the early Edwardiana yielding to a much more sharply defined mature style...Despite this being a six-disc compilation, there’s little filler. The lighter pieces charm. The performances are consistently inspired, and the recorded sound is refulgent.