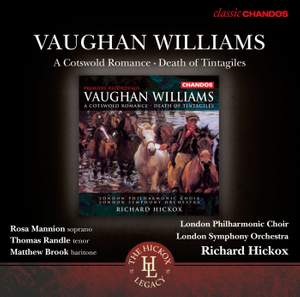 The Men of Cotsall (Chorus)

The Fight and its Sequel (Baritone solo, Mary, Hugh, Chorus)

Hugh in the Stocks (Hugh)

Vaughan Williams: The Death of Tintagiles

This re-release of two rarely heard works by Ralph Vaughan Williams, A Cotswold Romance and Death of Tintagiles, forms part of the new commemorative Hickox Legacy series on Chandos Records, leading up to (and continuing beyond) the fifth anniversary, in Nov 2013, of the conductor's untimely death. The recording is released on the Classic Chandos label at Mid Price.

Vaughan Williams composed his ‘ballad-opera’ Hugh the Drover, from which A Cotswold Romance is adapted, between 1910 and 1914. In his own words, he had an idea for an opera written ‘to real English words, with a certain amount of real English music’. The finished product, set in the Cotswold Village of Northleach during the Napoleonic wars, certainly does contain a host of identifiable English elements: the bringing-in of May, the bustling fair, and the prize-fight, for instance. Accommodating his publishers’ request for a version of the music which was more appropriate for concert performance, Vaughan Williams came up with the cantata A Cotswold Romance for tenor and soprano soloists with mixed-voice chorus and orchestra. The writing has the open, fresh, and vital quality that coloured many of Vaughan Williams’s works composed before the First World War.

In contrast, Death of Tintagiles, the incidental music for Maurice Maeterlinck’s play of the same name, is powerfully atmospheric and possesses a strong elegiac quality throughout. In five acts, the play concerns the tragic fate of a young child, Tintagiles, at the hands of his suspicious and jealous grandmother. Vaughan Williams perfectly captures the sense of foreboding and gloom in the play. In its simplicity and overall atmosphere the music recalls both Holst and Sibelius, while in the tender moments there are hints of A London Symphony, too.

BBC Music Magazine wrote of this disc: ‘Richard Hickox directs a vivid performance [of A Cotswold Romance] with splendid support from his assembled forces… Although not major works, these are notable additions to the catalogue, and the performances could hardly be better *****’.