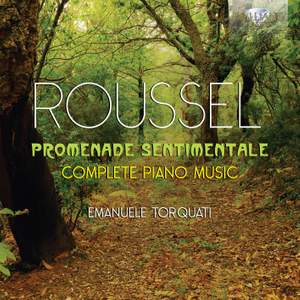 Albert Roussel (1869–1937) was ideally placed to develop a unique musical style. His background was more colourful than most of his fellow composers (he initially studied mathematics and worked as a naval officer before devoting himself to music), while his early years as a composer saw him exposed to a barrage of rich but conflicting musical influences: the impressionist movement (spearheaded by Debussy) and the more traditional approach of the Schola Cantorum (championed by d’Indy and Franck).

Roussel absorbed the wide-ranging styles that he heard around him, blending and modifying them to establish his own distinctive voice – a voice that can be perceived clearly in his music for solo piano. Traditional musical forms are a frequent point of inspiration: in the Suite in F sharp Op.14, Roussel uses rustic dances as a basis to explore both counterpoint and tonal disintegration, while the Bach-inspired Prélude et Fugue demonstrates the neo-Classical style that he was drawn to in his later period. Above all, Roussel’s piano music is characterised by its unique synthesis of rationality and feeling.

This approach – exploring tradition while pushing boundaries – is captured expertly by the award-winning pianist Emanuele Torquati; his subtle yet vital performances make this two disc set a must-have for any enthusiasts of French music.