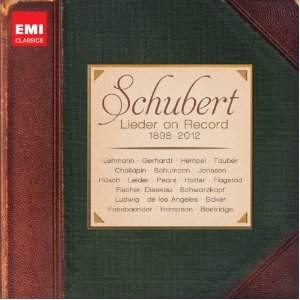 there’s an incredible sense of broadness and of historical perspective that makes this something of a museum item...There’s a song here for almost any occasion, mood, scene and emotion, with... — bbc.co.uk More…

In his tragically short life, the Austrian composer Franz Schubert (1797–1828) wrote over 600 songs and effectively established the German lied as a new art form in the 19th century.

When Schubert Lieder on Record (1898–1952) was first released as an 8 LP set in 1982, the compiler, the late Keith Hardwick, explained that it was his intention to examine how Schubert lieder was performed in the days before Schwarzkopf, Fischer-Dieskau, Ludwig and Baker, and so he painstakingly sought out examples of recordings right back to the earliest days of sound recording in Europe. Fred Gaisberg, the Gramophone Company’s pioneering recording engineer, began making flat-disc 78rpm records in London in August 1898. Initially he chose material of a popular nature, but on 11 October 1898 the contralto Edith Clegg recorded Schubert’s Ave Maria, and it is this item that opens CD 1. Hardwick finished his programme at the end of the 78rpm era, and the results of his labours are contained on the first six CDs in this set.

In reviewing the LP set in Gramophone magazine, J. B. Steane, the doyen of vocal experts, wrote: ‘Schubert Lieder on Record ... is a magnificent achievement, imaginatively conceived and scrupulously presented; and the quality of recorded sound in transference from the old originals is superlative.’ The artists represented are truly international and include German, Austrian, Dutch, French, English, Irish, Russian, Australian and American singers. Purely as an example of the riches contained in the set, Steane picked out LP side 5 and wrote this about it: ‘It begins with Elise Elizza, silvery, haunting and unexpected; then Ottilie Metzger's glorious contralto; Friedrich Brodersen singing “Sei mir gegrüsst”, intensely expressive; magical touches of Hempel; finally superb Kipnis and the opportunity of comparing his “Gruppe aus dem Tartarus” with Metzger's or with Hotter's unpublished one, and his “Erlkönig” with no fewer than four others.’

The records are presented in roughly chronological order of recording, a pattern also followed in the later part of the set. In the days of 78s, many of the singers restricted themselves to a very small selection of the most popular songs, so this affords the opportunity to compare different interpretations of the same composition.

CDs 7 to 16 contain a programme of Schubert lieder performed by a wide range of singers from 1952 to the present day, but in selecting the artists and recordings for these CDs, every effort has been made to cover as many different songs as possible. The result is that the first six CDs contain 93 songs sung by 64 singers in a total of 128 performances, whereas the remainder of the set presents 30 singers in a total of more than 200 performances with very few songs repeated. CD 7 is devoted entirely to Dietrich Fischer-Dieskau singing some of Schubert’s most substantial although rarely performed ballads. The next six CDs contain mixed programmes by a starry collection of singers, including Elly Ameling, Victoria de los Angeles, Nancy Argenta, Arleen Auger, Janet Baker, Ian Bostridge, Nicolai Gedda, Christa Ludwig, Lucia Popp, Christoph Prégardien, Hermann Prey, Kate Royal, Elisabeth Schwarzkopf, Fritz Wunderlich and many others. Then come complete performances of Die schöne Müllerin by Peter Schreier, Schwanengesang by Olaf Bär, and finally Winterreise by Thomas Hampson, which forms a link to the bonus CD, a penetratingly informative discussion by Thomas Hampson entitled: Schubert’s Journey – An Exploration with Thomas Hampson.

Sung texts and translations are included on the final enhanced CD (CD 17).

there’s an incredible sense of broadness and of historical perspective that makes this something of a museum item...There’s a song here for almost any occasion, mood, scene and emotion, with stunning range crammed into a mere few minutes per piece...with this box on the shelf of your library your musical foundations will be infinitely stronger.