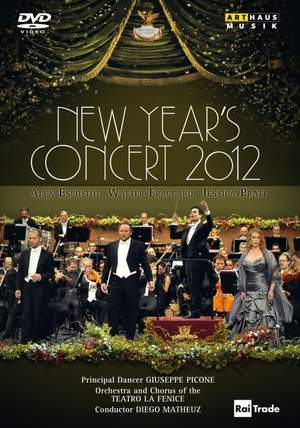 As is now customary, the first part of the 2012 New Year‘s Concert from Teatro La Fenice is exclusively orchestral, with Symphony No.5 by Pyotr Tchaikovsky. The second part, with soloists Jessica Pratt, Walter Fraccaro and Alex Esposito as well as the choir, is dedicated to melodrama, ending with the traditional chorus “Va pensiero” from Nabucco and the toast “Libiam ne lieti calici” from La Traviata by Giuseppe Verdi.

The twenty-seven year old conductor and violinist Diego Matheuz is a graduate of the internationally known Venezuelan Sistema and is already widely known as one of the most promising developing talents from the Americas. In 2005 he began studying conducting and soon attracted the attention of Sir Simon Rattle and Claudio Abbado, with whom he worked in Caracas, Lucerne and Bologna.

In September 2011 he was appointed as Principal Conductor of the Teatro La Fenice.