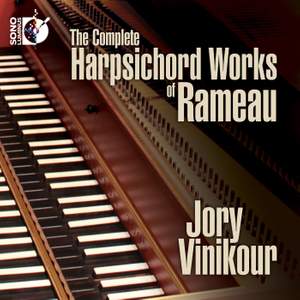 The Complete Harpsichord Works of Rameau

VI. Sarabandes I and II

VI. Rigaudons I and II

Rameau’s output as a composer for solo harpsichord must be considered among the most important in French 18th century keyboard repertoire, along with that of François Couperin. The musical and harmonic ingenuity demonstrated throughout these works, as well as Rameau’s uniquely idiomatic approach to the harpsichord, ensure these works a permanent place in the repertoire of all harpsichordists.

Jory Vinikour is recognized as one of the outstanding harpsichordists of his generation. A highly diversified career brings him to the world’s most important festivals and concert halls as recital and concerto soloist, partner to several of today’s finest singers, and as one of the most visible continuo performers. Born in Chicago, Jory Vinikour came to Paris on a scholarship from the Fulbright Foundation to study with Huguette Dreyfus and Kenneth Gilbert. First Prizes in the International Harpsichord Competitions of Warsaw (1993) and the Prague Spring Festival (1994) brought him to the public’s attention, and he has since appeared in festivals and concert series throughout much of the world.

Mr. Vinikour appears regularly as harpsichordist/continuist at the Paris Opera, Netherlands Opera, Salzburg Festival, Teatro Real de Madrid, and Glyndebourne. Jory is also a regular presence at the Zurich Opera, and has appeared on their stage (disguised as Handel!) with Cecilia Bartoli in Handel’s Il trionfo del tempo é del disinganno. He performed Stravinsky’s solo harpsichord part in productions of The Rake’s Progress at the Théâtre des Champs-Elysées, the Paris Opera and Théâtre de la Monnaie.