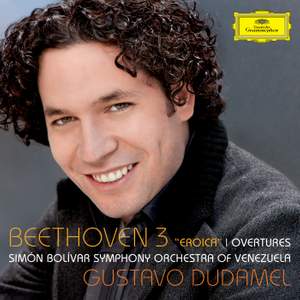 This is the best conducting I have heard from Gustavo Dudamel, and the best playing from the Simon Bolivar Symphony Orchestra...The playing on this disc is tremendous, with the orchestra providing... — BBC Music Magazine, March 2013, More…

Gustavo Dudamel and the Simón Bolívar Orchestra bring their unique energy to one of the summits of the orchestral repertoire - Beethoven’s mighty Symphony No.3, the “Eroica”.

Beethoven’s third symphony is not only one of his most personal works – powerful in both grandeur and pathos – but also the source of some of classical music’s most instantly recognizable melodies.

The album also includes two of Beethoven’s best-loved overtures, Egmont, inspired by Goethe’s play, and the ballet, The Creatures of Prometheus.

No longer a ‘youth orchestra’, the Simón Bolívar Symphony Orchestra of Venezuela is a world-class ensemble in its own right, touring the world’s great concert halls as ambassadors for their country’s unique system of musical education, ‘El Sistema’.

The combination of powerful, accessible repertoire, Dudamel’s irrepressible charisma and the remarkable story of the Simón Bolívar Orchestra make this recording not only desirable for Dudamel fans and those of Beethoven’s music, but a must for anyone wishing to discover the power of classical music at its very best.

Feted like a rockstar in his homeland, Gustavo Dudamel was recently awarded a Grammy for Best Orchestral Recording of 2011. His epic cycle of Mahler symphonies in Los Angeles and Caracas made him front page news in The New York Times and his record-setting Mahler 8 was shown live in hundreds of cinemas around the world. Gustavo made a stellar debut in the Wiener Philharmoniker’s prestigious subscription concerts in December and takes the Berliner Philharmoniker on tour this Spring.

This is the best conducting I have heard from Gustavo Dudamel, and the best playing from the Simon Bolivar Symphony Orchestra...The playing on this disc is tremendous, with the orchestra providing a glowing central European sound.

Take it for granted that the playing of the Simon Bolivar orchestra is very good. But Gustavo Dudamel isn't pre-eminent in confronting and realising the transcendence of a work totally new in its day.

you can tell from the athletic and muscular first movement of Beethoven’s Eroica that Gustavo Dudamel’s esteemed musicians are still youthful in spirit.
This is a performance with plenty of powerful cut and thrust, though not enough structural planning...[in the Egmont Overture] Dudamel builds the music’s argument to a genuinely exciting conclusion.