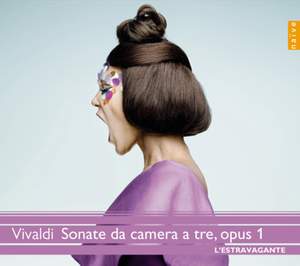 passion positively smoulders throughout these performances...This is some of the most fiery, spontaneous, unashamedly expressive and brilliantly excessive Vivaldi-playing on CD, with the power... — BBC Music Magazine, October 2012, 5 out of 5 stars More…

In 1705, Giuseppe Sala published in Venice the Suonote do camera a tre, due violini o violone o cembalo op.1 of Antonio Vivaldi. This set of trio sonatas marked the official 'debut' of a composer who was already more than a mere youth (the 'Prete Rosso' was then 27-years old), and probably contains the earliest works of his that have come down to us. It is very likely, though, as Michael Talbot has pointed out, that the copy of 1705 is in fact a reprint of a now lost first edition published in 1703. However that may be, this collection dedicated to the Brescian nobleman Count Annibale Gambara displays a balance - at times, inevitably, somewhat precarious - between reference to codified formulas and models, on the one hand, and the definition of an original expressive voice on the other. In terms of scoring, his Op.1 adopts the recently created Italian format of the trio sonata, the output of which was dominated by the Arcadian reform of Arcangelo Corelli: even in Venice, where a renowned instrumental tradition already existed, Corelli's Opp.1-4 enjoyed almost immediate diffusion and were reprinted by the aforementioned Sala just a few years after the Roman first editions (in 1684, 1686, 1691 and 1695 respectively).

passion positively smoulders throughout these performances...This is some of the most fiery, spontaneous, unashamedly expressive and brilliantly excessive Vivaldi-playing on CD, with the power and elan of a Ferrari, the exuberant flair of Ferragamo and the playfulness and poignancy of Fellini. Bravissimi!

Stefano Molinari, the founder of the ensemble, and his fellow violinist Stefano Rossi are perfectly matched partners in a style of expressive dialogue that takes the affective possibilities of the Baroque violin to its limits.

You could not ask for better advocates than the sharp-edged L'Estravagante ensemble, whose wiry but flexible playing raises the current flourishing Italian baroque revival to new heights. Start with the tight-knit Sonata X, and save the dazzling variations of La Follia (placed first on the disc but last in the published set) till the end