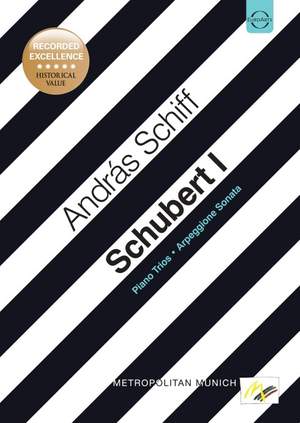 A new release from the series of Metropolitan Munich programs.

András Schiff, Yuuko Shiokawa and Miklós Perényi play the Schubert Piano Trios with energy and sensitivity, bringing out all the contrasts and subtle shades of this joyful pieces.

The Trios were among the only of Schubert's late compositions he heard performed before his death.

The final piece on this DVD production features the less well-known ‘Arpeggione’ Sonata, given here in its arrangement for the cello. This work possesses Schubert’s characteristic mixture of cheerful vigour and wistful melancholy, and is performed by Schiff and Perényi with imagination and elegance.

Perényi masters the Arpeggione with apparent ease, with Schiff accompanying sensitively. There's a fine sense of ensemble, beautifully delineating dark and light in the Trios.

The playing is moving and melancholic at times, and lively and boisterous at others...This is a delightful performance of some of Schubert’s best chamber music. While the video quality is not perfect, it’s easy to forget this as you are carried away by the wonderful music.