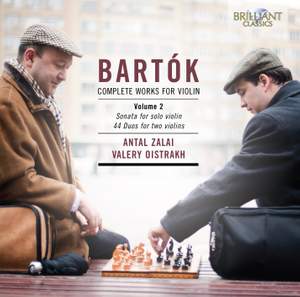 Zalai conjures up a strongly ethnic sound...One might wish for a little more time to draw breath after such a challenging and uncompromising work [as the Sonata], but the gentler tones of the... — BBC Music Magazine, Christmas 2012, 4 out of 5 stars More…

Béla Bartók (1881–1945) is considered by many to be the greatest Hungarian composer, as well as one of the most significant musical voices of the 20th century. Self-taught and originally trained as a pianist, he wrote in a number of genres for a variety of different instruments; his works for violin, two of which make up this release, rank among his finest achievements.

This exciting follow-up to Antal Zalai’s previous recording of Bartók’s early works and transcriptions for violin, performed with József Balog, begins with the composer’s Sonata for solo violin of 1944 – a monumental expression of his compositional mastery and defiant will in the face of death. Written for Yehudi Menuhin, a notable interpreter of the Hungarian’s compositions, the work draws on the music of J.S. Bach through its chaconne and fugue-based movements, representing a veritable exercise in the most complex virtuosity.

With ferocity and intensity dominating the sonata, the 44 Duos for two violins that follow offer a stark contrast in character. From the chitinous whirrings of the ‘Mosquito Dance’ to the oriental passion of the ‘Arabian Song’, these concise studies not only allow Bartók’s love of Hungarian folk song to come to the fore, they also cater for beginners as well as the most highly skilled performers. They are a charming conclusion to a collection that, containing expert performances from two of the world’s leading violinists, brims with colour and traverses the full range of violin techniques.

Zalai conjures up a strongly ethnic sound...One might wish for a little more time to draw breath after such a challenging and uncompromising work [as the Sonata], but the gentler tones of the Duos are performed here with grace and humour, projecting an astonishing variety of moods.