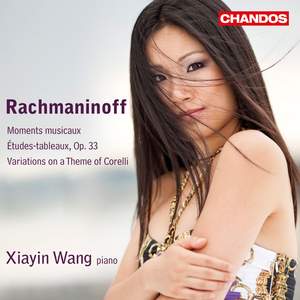 she fares extremely well in major solo works by Rachmaninov...Every one of the numbers in the Op. 33 Etudes-tableaux is vividly and incisively characterised, and she conjures a wonderful depth... — BBC Music Magazine, August 2012, 5 out of 5 stars More…

No. 1 in B-Flat Minor. Andantino

No. 2 in E-Flat Minor. Allegretto - Adagio

No. 3 in B Minor. Andante cantabile

No. 5 in D-Flat Major. Adagio sostenuto

With her winning combination of consummate technical brilliance, fine musicianship, and personal verve, the pianist Xiayin Wang captures the hearts of audiences wherever she appears. She is achiving high levels of recognision for her commanding performances as a recitalist, chamber musician, and orchestral soloist in such venues as New York’s Carnegie Hall and Lincoln Center. This is Wang’s second disc for Chandos Records. Her previous disc, of piano works by Earl Wild, was an ‘International Piano Choice’ in International Piano.

The six Moments musicaux constitute a set of solo piano pieces, each representing a different but complementary musical form, such as the nocturne, song without words, barcarolle, virtuoso étude, or variations. Although intended from the beginning as part of a set, each piece holds its own well, with individual themes and moods, ranging from the sombre funeral march of No. 3 to the majestic canon of No. 6. Revolutionary and grand in style, the Moments musicaux still retain the charm of Rachmaninoff’s early works: dense, rich in counterpoint, highly chromatic, poignantly nationalistic, deeply felt, and, of course, exceptionally challenging to the pianist.

The Études-tableaux were composed as ‘picture pieces’. Rachmaninoff never did disclose what inspired each piece, but stated: ‘I don’t believe in the artist that discloses too much of his images. Let [the public] paint for themselves what [the music] most suggests.’

The Variations on a Theme of Corelli was the last original solo piano work that Rachmaninoff wrote, and the only one he composed outside Russia. The theme of this cycle is actually not by Arcangelo Corelli (1653 – 1713), but an old Spanish-French folk dance. The Variations were written in 1931, the same year that the composer boldly denounced the Soviet Union, referring to its leaders as ‘Communist grave-diggers’. Stalin consequently banned Rachmaninoff’s music, but, recognising its more appealing and generally less radical nature, rehabilitated it three years later. The work is among several pieces that were later well received in Moscow.

she fares extremely well in major solo works by Rachmaninov...Every one of the numbers in the Op. 33 Etudes-tableaux is vividly and incisively characterised, and she conjures a wonderful depth of feeling and range of keyboard colouring...The Corelli Variations here possess a poise, dignity and underlying melancholy that not every interpreter finds in this fascinating late work.

Here, even in Rachmaninov's most savage and turbulent pages, is playing of an awesome clarity and poise. Xiayin Wang makes her chosen composer sound greater and more indelibly Russian than ever...you will surely be lost in wonder at Wang's pianistic but above all musical glory. Such playing underlines the pity one feels for those poor puritan souls still unable to appreciate such beauty.