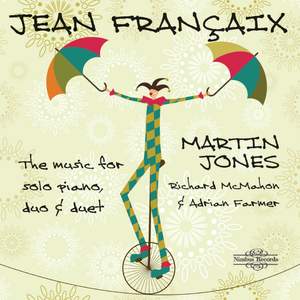 Martin Jones and his accompanying colleagues also obviously have a high regard for his music and that comes out in sparklingly brilliant performances. — MusicWeb International, December 2012

I. Le bebe a la cuiller

Jean René Désiré Françaix was born in Le Mans on 23 May 1912 into a musical family – his father was a composer and pianist, his mother a singing teacher.

The young boy’s gifts both as a creative artist and an executant were evident from an early age and recognised by Maurice Ravel, who wrote to Jean’s father, ‘Among the child’s gifts I observe above all the most fruitful an artist can possess, that of curiosity.’

After studying with his father, Françaix became a pupil of Nadia Boulanger and also studied piano with Isidore Philipp at the Paris Conservatoire, winning the premier prix (first prize) in Philipp’s piano class in 1930.

An outstanding pianist, he gave memorable performances of his own work.

The piano occupies a prime position in Françaix’s output, whether as a concertante instrument or in the more intimate forms of chamber music and instrumental pieces for solo piano and duets. He used it principally as a vehicle for exhibiting his virtuosity yet his piano scores contain several examples of introspection and nostalgic reflection.

This centenary release presents all the solo works and original works for 4 hands, plus his arrangements of the ballet score ‘Scuola di ballo’ and the music to the Guitry classic film ‘Napoleon’.

Martin Jones and his accompanying colleagues also obviously have a high regard for his music and that comes out in sparklingly brilliant performances.