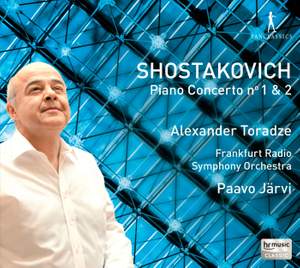 Toradze has a reputation for barnstorming playing of Russian warhorses...but is also capable of limpid tone...[his] playing is full of impish character. — International Record Review, June 2012

Shostakovich: Concertino for two pianos in A minor, Op. 94

The label Pan and the HR (Hessischer Rundfunk) present the first issue of their recently started collaboration with a new recording of Shostakovich’s piano concertos Opp. 35 & 102.

Alexander Toradze is universally recognised as a masterful virtuoso in the grand Romantic tradition. With his unorthodox interpretations, deeply poetic lyricism, and intense emotional excitement, Alexander Toradze lays claim to his own strong place in the lineage of the great Russian pianists.

Paavo Järvi has been Chief Conductor of the Frankfurt Radio Symphony Orchestra (hr-Sinfonieorchester) since 2006, enriching it through his work with new and exciting aspects. The Estonian is one of the most successful conductors on the international music scene.

Dmitri Shostakovich wrote only two piano concertos. He was himself an accomplished concert pianist and had created his First Piano Concerto with a parodist slant to show off his own virtuoso abilities. The work marks the conclusion of Shostakovich the composer’s intensive study phase of piano music. The Second Concerto, written for his son Maximilian, is unusually happy and optimistic in nature. The slow movement is arguably one of the most beautiful pieces ever written for the piano, wonderfully romantic but never sentimental, while the outer two movements bubble over with spirited effervescence and optimism.

Toradze has a reputation for barnstorming playing of Russian warhorses...but is also capable of limpid tone...[his] playing is full of impish character.