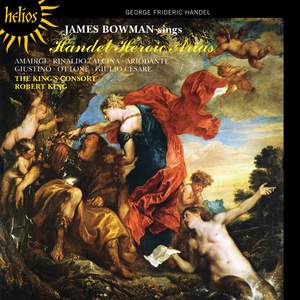 One of the most successful collaborations between legendary British countertenor James Bowman singing at the height of his powers and The King’s Consort. Universally praised on its first release, it here makes a welcome second outing on the Helios label.

Handel’s Italian operatic arias put the virtuoso singer very much in the spotlight, and none more than the most precious voice-type of the era, the star castrato. This is a selection of Handel’s most famous and melodic heroic set-pieces for his operatic heroes, alternately sweetly reflective or sparkling with fire and energy, and all performed with Bowman’s unmistakeable panache.