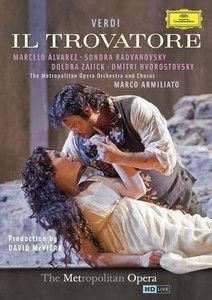 consummate Verdians in an insightful production by David McVicar...Radvanovsky is at the top of her form vocally and dramatically, with consistently breathtaking musicality and stage presence...... — MusicWeb International, October 2012 More…

David McVicar's acclaimed production employs a spectacular revolving set to bring a powerful new momentum to Verdi's dark drama of love and revenge. The opera features some of Verdi's best-loved music, including the Anvil Chorus and the heroic tenor aria Di quella pira.

Often described as requiring 'the four greatest singers in the world', this performance of Il Trovatore brings together a quartet of stars who have sung their roles to great acclaim throughout the world.

“Álvarez made a stalwart, passionate, masculine figure… Radvanovsky has all the technical devices necessary for Leonora, and she is, moreover, a passionate actress … Hvorostovsky sang with superb, flawless line, total control and long, flowing, high notes … Zajick held down Azucena powerfully … The opera’s end I have never seen staged or acted more convincingly” (Opera Today).

consummate Verdians in an insightful production by David McVicar...Radvanovsky is at the top of her form vocally and dramatically, with consistently breathtaking musicality and stage presence... Zajick’s Azucena is equally strong in a role she has made her own...the visual dimensions are enhanced with shots and angles that take the viewer to the stage.