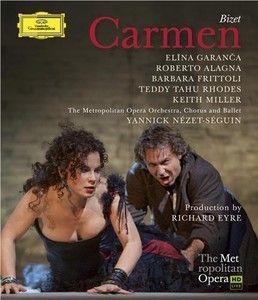 As well as triumphant successes as Carmen in London, Vienna and Munich, Elīna Garanča, “the Carmen of our day” (News, Austria), took New York’s Metropolitan Opera by storm in this ‘Met Live in HD’ performance, transmitted to cinemas around the world and now available for the first time on BluRay. Starring alongside her is star tenor Roberto Alagna as Don José, Barbara Frittoli as his first love Micaëla and New Zealand baritone Teddy Tahu Rhodes as the toreador Escamillo. The Metropolitan Opera Orchestra is conducted by rising star Canadian maestro Yannick Nézet-Séguin.

everyone on stage, from stars to comprimarios and children (authentically underfoot), crackles with individual life, ideal on video... Garanča's clean-cut Baltic mezzo and fresh good looks suggest not the stereotypical gypsy wench, but a free spirit, intelligent and wilful

Here is an opera DVD where, rare in my experience, each individual element matches the excellence of the others: production, cast, performance, film direction and use of the medium....Garanča has a fine sparring partner in Alagna - both roles are as well acted as they are sung...Halvorson's fluent direction conveys a real sense of occasion to the whole evening.

Not only does Ms Garanča sing with wonderful enunciation, but also with meaning and a wide variety of tonal colour. In her singing and acting she exudes Carmen’s sexuality whilst not over-egging it with hip swinging and flaunting...Along with Elina Garanča, the big plus of the performance is found in Yannick Nézet-Séguin. His idiomatic conducting has verve, vitality and sensitivity.

Garanča is right up there with the best. She sings with a seductive and alluring tone, and her technique is superb. The combination of her film star looks and her natural acting draw you into her character completely...Alagna also makes an excellent Don José. I think this is one of his strongest roles and he sings with both real power and refinement.

This is a calculating Carmen, who knows the worth of her assets. Some of her wily intelligence is reflected in the voice — strong in all reaches, flaming at the top...[Tahu Rhodes] prov[es] himself to be an ideal toreador, virile of voice, and very tall. All in all, a Carmen well worth seeing and hearing.