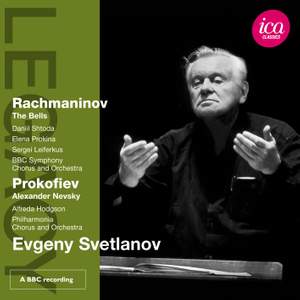 [Svetlanov's] right on top of his game in this performance and so too are the Philharmonia Chorus and Orchestra.The music leaps out of the loudspeakers right from the start...This is a tremendous,... — MusicWeb International, August 2012 More…

I. Russia under the Mongolian Yoke

III. The Crusaders in Pskov

V. The Battle on Ice

VI. The Field of the Dead

The great Evgeny Svetlanov (1928–2002) was music director of the USSR State Orchestra (1965–2000) and also had permanent positions with the LSO, the Residentie Orchestra in the Hague and the Swedish Radio Symphony Orchestra.

He frequently guest conducted the NHK Orchestra in Japan, the Orchestre National in Paris as well as the Philharmonia in London. May 2012 marks the 10th anniversary of his death and ICA mark this with a coupling of Rachmaninov’s The Bells and Prokofiev’s Alexander Nevsky. These two composers were very closely associated with the conductor. The performance of The Bells was taken from Svetlanov’s last concert in April 2002; he died one month later.

[Svetlanov's] right on top of his game in this performance and so too are the Philharmonia Chorus and Orchestra.The music leaps out of the loudspeakers right from the start...This is a tremendous, gripping performance of The Bells. If there’s a better one in the catalogue I should love to hear it...
This is a phenomenal disc! It shows Evgeny Svetlanov at his incandescent, inspirational best.

a performance of The Bells that was possessed of a passion, an intensity and a radiant glow that were qualities forever associated with a Svetlanov concert...Svetlanov could plumb the music’s very soul...Throughout, the orchestral playing is rich, luminous and lucid of texture. The CD is worth having for this performance alone. Coupled with Svetlanov’s 1988 Alexander Nevsky, it is a must.