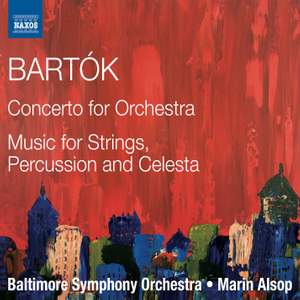 If you're unfamiliar with these seminal mid-20th century works, here's an unmissable chance of getting to know it. — BBC Music Magazine, June 2012, 5 out of 5 stars More…

Béla Bartók’s Concerto for Orchestra, one of his greatest works, was written in the United States after the composer was forced to flee Hungary during World War II. It is not only a brilliant display vehicle for each instrumental section but a work of considerable structural ingenuity that unites classical forms and sonorities with the pungency of folk rhythms and harmonies. Music for Strings, Percussion and Celesta explores darker moods through a score of marvellously poised symmetry.

This has long been a popular coupling of works by Béla Bartók, but this new release rides on the crest of a wave of previous successes and will occupy a leading position amongst the competition on the quality of its recording and performance. Marin Alsop and the Baltimore Symphony Orchestra have a synergy which has made their Dvořák symphonic recordings sound ‘as fresh as when Dvořák put pen to paper’ (BBC Music Magazine on the Symphonies 7 and 8, NBD0010). Of Dvořák’s New World Symphony (8570714) BBC Music Magazine also wrote, ‘it is rare to be able to say that a performance forces one to listen to a work anew, but this is exactly what Alsop’s reading achieves.’

If you're unfamiliar with these seminal mid-20th century works, here's an unmissable chance of getting to know it.

Warmth and vitality are appropriate keywords for this coupling, a practical Bartok primer you might say, well played, persuasively interpreted and nicely recorded...In the Concerto for Orchestra's first movement Marin Alsop and her players generate plenty of energy...a fine bargain and a credible starting point for those wanting to dip a toe into Bartokian waters.

Her orchestra's precision here is enviable, with crisp ensemble playing and solo voices of considerable character. The sound is not particularly full-bodied but neither is it bloated - rather, it is to some extent reminiscent of the finest American orchestras of past decades in privileging nuance above raw power.

This muscular and thrilling recording amply demonstrates why Marin Alsop is such a sought after conductor and why the Baltimore Symphony is so highly thought of all over the world.

the music seems to have been conceived with the upfront style of American orchestral playing in mind...[Alsop's] account of the Music for Strings, Percussion and Celesta...is very impressive, controlled and pungent, albeit without quite the expressionist edge that the music sometimes needs.