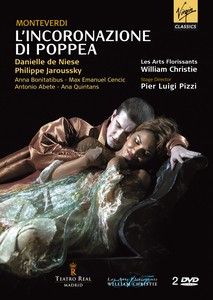 Danielle de Niese brings this production to life…camerawork and sound are very good indeed - the former is not too ‘busy’ and the latter is especially effective when heard on a decent audio system. — MusicWeb International, November 2012 More…

Here, he conducts an operatic performance recorded in 2010 at Madrid’s Teatro Réal: Monteverdi’s L’incoronazione di Poppea, with its potent Ancient Roman blend of sex and politics, high drama and comedy. “William Christie’s achievement with Les Arts Florissants is enormous,” wrote Spain’s leading newspaper, El País. “With 17 musicians playing period instruments, he evoked a veritable orgy of nuances, subtly created atmosphere and showed a perfect sense for the accents of the piece.” Poppea proved an apt culmination to Christie’s three-year project mounting Monteverdi’s three operas in Madrid with the Italian director Pier Luigi Pizzi, whose productions are always notable for their elegance and beauty.

Performed in a new edition of the Venetian version of the opera by the musicologist Jonathan Cable, Poppea features a starry cast. Playing the upwardly mobile temptress of the opera’s title is the glamorous American soprano Danielle de Niese, who, in the words of the New York Times, is “seductive enough to woo gods as well as mortals”. She made her international breakthrough at Glyndebourne as another legendary siren of the First Century AD – Cleopatra (in Handel’s Giulio Cesare). In an interpretation described as “overwhelming” by El País, the capricious Emperor Nero (Nerone) is embodied by French countertenor Philippe Jaroussky – in a role very different from the last operatic Roman he took on for Christie, the titular saint in Landi’s Sant’Alessio (Virgin Classics DVD 5099951899998). The brilliant Croatian countertenor Max Emanuel Cencic is a frequent sparring partner for his French colleague – not least in a recent Virgin CD of duetti da camera conducted by William Christie – and in Sant’Alessio he played Jaroussky’s mother (!); here he plays Nerone’s rival for Poppea’s love, Ottone, while Nerone’s discarded wife, Ottavia, is sung by the Italian mezzo soprano Anna Bonitatibus, described by Forumopera as “an incandescent Ottavia who vouchsafed a superb example of singing and of theatre”.

Danielle de Niese brings this production to life…camerawork and sound are very good indeed - the former is not too ‘busy’ and the latter is especially effective when heard on a decent audio system.