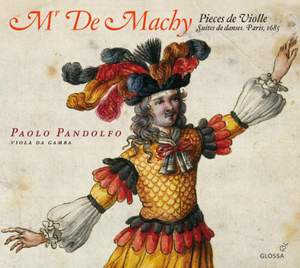 Machy: Pieces de violle: Suite No. 8 in A major

With his performance of the music of De Machy, Paolo Pandolfo is enriching the recorded survey of solo viola da gamba music with a very special contribution; such as he has done before with his recordings of music by Sainte-Colombe, Abel or of his most warmly-received recording, the Bach Cello Suites in their transcription for viola dagamba. The publication of the 'Pièces de Violle' (Paris, 1685), the first literature for the viola da gamba in France, unleashed a veritable polemic or querelle with Jean Rousseau concerning the “true manner of playing the viola”, which had been described by De Machy with a wealth of details in the prologue to his work and in which radiates an enormous sense of aplomb and certainty. His advocacy for the viola da gamba as a harmonic (or chordal) as well as a melodic instrument was to go on to have a significant influence on later composers such as Marin Marais and Antoine Forqueray. With his recording and also in his accompanying essay, Paolo Pandolfo places special emphasis on one facet of these pieces which tends to pass unnoticed: their danceable character. Countless sources from the time tell us about the vigorous interest in dance in the 17th century, a passion practiced in an almost obsessive way, not only by court nobility, but by the rural aristocracy and the wealthier bourgeoisie as well.

Pandolfo coaxes an array of shades and effects and lets the viol reverberate with Machy's plush musical textures...Above all, Pandolfo makes the music dance with his supple bowing, elastic rhythms, dainty ornaments, floated notes and silence. Short of wearing pointed shoes, he could hardly make these performances more balletic...even the curmudgeonly Machy would surely be entranced.