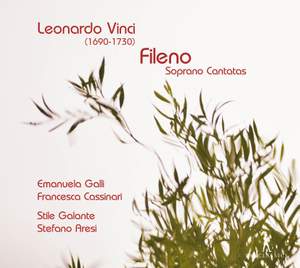 Leonardo Vinci (1690-1730) who is rumoured to have been poisoned in the wake of an ill-advised affair, is (with Porpora and Leo) one of the greatest geniuses of Neapolitan Baroque music and the central figure in the creation of a new musical language. This programme offers a wonderful selection of cantatas for soprano, including 'Mesta, oh Dio, tra queste selve', written by V. Tesi, and 'Parto ma con qual core’, written by F. Bordoni. A trip to Naples and Rome in the 18th century, an Arcadian world with a soul, an inordinate passion for beauty, the infinite regret for the loss of a mythical golden age, and murky secret plots.

Stile Galante was founded in the Spring of 2010 and specialises in Italian music, in particular the Neapolitan area, and the enormous legacy of chamber cantatas for solo voice, from the works of Leo, Vinci and Porpora. Composed of talented young European instrumentalists Stile Galante are directed by Stefano Aresi.