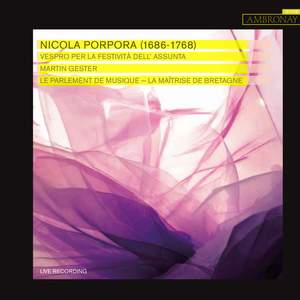 Porpora's 'Vespers' was first performed in Venice at the Ospedaletto, one of four orphanages for girls that specialised in music to the extent that they were regarded as conservatories. The most famous of the four was the Pietà, where Vivaldi taught violin. The Vespers 1744 consists of five psalms, a Magnificat and a Salve Regina. Four of the pieces can be found in autograph manuscripts in the British Library, including three of the five great psalms: the Laetatus sum and Nisi Dominus in Additional 13126 and the Lauda Jerusalem in Additional 1412, all three dated 1744. Another of the Porpora manuscripts in the British Library, Additional 14125, contains two Salve Reginas dated 1744; the one designated ‘Per Angiola Moro’ has been chosen for the Vespers 1744 because of its beauty. The music is conceived in the early Classical style as developed during the 1720s by Porpora and his rivals, Leonardo Vinci and Johann Adolph Hasse. The music is characterised by its ornate periodic melodies which later became exemplified in the church music of Mozart. Maestro Porpora of the Ospedaletto would later become a character in George Sand’s novel 'Consuelo', with the heroine a composite of Angiola Moro and Porpora’s most famous pupil ‘La Mingotti’. In this transformation from fashionable opera composer to revered maestro di cappella and teacher, the Vespers of 1744 probably played a pivotal role, somewhat akin to the contemporary 'Messiah' or 'Samson' in Handel’s ‘conversion’ to oratorio. For several years now Le Parlement de Musique has pursued its investigation of the concertante repertoire of the Venetian ospedali: after Bassani, Vivaldi, Hasse, Jommelli and Latilla, the spotlight is now on Nicola Porpora and his concertato Vespers for female voices and orchestra of the Ospedaletto.

The all-female choir on this recording, La Maitrise de Bretagne, sounds absolutely splendid and perfectly natural - the absence of deeper voices is scarcely noticeable after the first minute or two...The three solo singers, two sopranos and one contralto, acquit themselves well in Porpora's very florid writing...All in all, this is a fascinating and highly enjoyable project.

I have nothing but admiration for the performances of the three singers … They have very fine and agile voices, and are meeting the high requirements of this music with impressive ease.