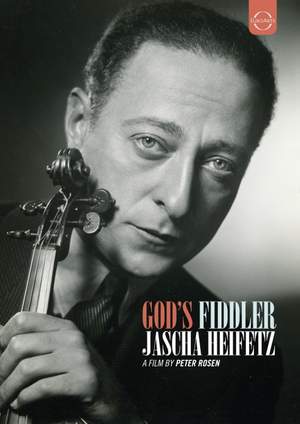 A film by Peter Rosen

Unmissable expose on the so-called 'violinist of the century', including rare newsreel footage, home movies, expert comment, and most importantly, the incendiary virtuosity of an artist whose... — BBC Music Magazine, July 2012, More…

Not since Paganini had there been such a magician on the violin. We see never-seen-before vintage filmed performance clips and home movies of Jascha Heifetz and learn that he was the first truly modern violin virtuoso, the man about whom Itzhak Perlman said, “When I spoke with him, I thought, ‘I can’t believe I’m talking with God’.”

This film portrays an artist for whom only perfection would do. A musical ‚wunderkind’ who went on to set the standards for nearly a century. We get to know through home movies and personal family photos taken from 1903-1987, a prestigious concert artist so well known in popular culture, his name became shorthand for greatness, for everyone from Jack Benny to The Muppets to Woody Allen. Filmed in Vilna, Lithuania, Saint Petersburg, Russia, and in the Heifetz Studio in Los Angeles, this documentary re-creates a life that spanned the 20th Century, a life that both influenced the period, and was affected by its turbulent times.

We hear from all the great violinists of his generation, and from many of his former students who are still alive, that Heifetz was a legendary but mysterious figure whose story embodies the dual nature of artistic genius: the paradox of how a mortal man lives with immortal gifts – gifts he must honor, but which extract a lifelong price. Is the man and the artist the same person? What is the price each pays? And who was the man behind the music?

Unmissable expose on the so-called 'violinist of the century', including rare newsreel footage, home movies, expert comment, and most importantly, the incendiary virtuosity of an artist whose effortless poise under supreme technical pressure remains a thing of wonder.

Amazingly, this is the first film to tell the story of Jascha Heifetz, for many the greatest violinist in history...no one has produced anything to match this or, indeed, assembled such a vast array of Heifetz material. It's unmissable.