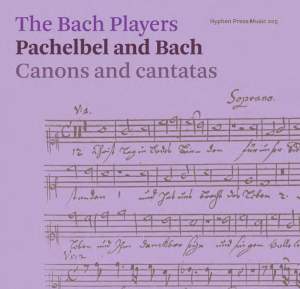 Pachelbel and Bach: Canons and cantatas

The Bach Players can notch up yet another resounding success in their ever inventive explorations of Johann Sebastian by juxtaposing works by other composers...Their is little to dislike here,... — Classical Music, 2nd June 2012, More…

Pachelbel: Partie a 5 in G major

In their vivid new recording, The Bach Players introduce the music of Johann Pachelbel, a friend of the Bach family and 30 years older than Johann Sebastian. Each disc of this double CD presents cantatas with texts set by both Pachelbel and Bach: ‘Christ lag in Todesbanden’ and ‘Was Gott tut, das ist wohlgetan’. In the first case the older composer’s influence on Bach’s writing is very clear; in the second, we hear the mature Bach. A generous helping of Pachelbel’s music is given: the beautiful Canon and two of his sacred concertos. Bach is represented also by his cantata for solo alto, ‘Widerstehe doch der Sünde’, and the lesser known canons from the Goldberg Variations in an arrangement by the group’s keyboard player, Silas Wollston.

A 28-page booklet includes an essay on this music by the composer Hugh Wood and a note by Silas Wollston on his arrangement of the Goldberg canons. Texts of all the vocal pieces are given in German with English translations. There are photos of the recording session. The CDs and booklet are held in a packet made of card and without plastic.

The Bach Players can notch up yet another resounding success in their ever inventive explorations of Johann Sebastian by juxtaposing works by other composers...Their is little to dislike here, and much to enjoy: the team of singers demonstrates technical brilliance and expressive force, while the instrumentalists are equally excellent