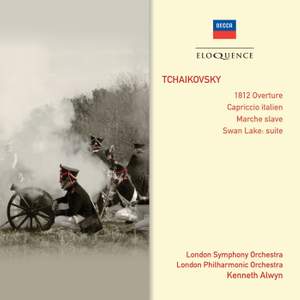 Kenneth Alwyn has secured exceptionally good playing from the London Symphony Orchestra ; the woodwind, in particular, shape their phrases most beautifully, and with first-class ensemble... The... — Gramophone Magazine More…

By 1958, Decca has been recording in stereo for four years, regularly sending out two production teams, one to make the stereo master, the other the mono master. Each team of producer and engineer worked independently of the other to produce the optimum sound for their system. In 1958, to launch their new stereo series (with an SXL prefix for the catalogue number) it was decided that a new and spectacular recording was required for the very first record (SXL 2001). Tchaikovsky’s 1812 Overture, a popular orchestral showpiece that could show off the stereo imagery, was a natural choice. The cannon shots made a particularly strong impression at the time; the well-kept secret at the time is that they were, in fact, over-dubbed, speeded-down gun shots! As the Gramophone reviewer in October 1958 pointed out, ‘In every respect, in fact, this is a first-class record’.

Kenneth Alwyn was a principal conductor of the Royal Ballet at Covent Garden where he shared the rostrum with such luminaries working with the company at that time as Malcolm Sargent, Ernest Ansermet, Arthur Bliss, William Walton, Hans Werner Henze and Benjamin Britten the latter nominated him as conductor of the original production of The Prince of the Pagodas. In the notes for this CD – to which his 1959 recording of a suite from Swan Lake has been added to the items on the original record – he recounts his experience at the recording sessions for Tchaikovsky’s 1812 Overture, which, issued in 1958, was to become the first stereo recording of this work and Decca’s first official stereo recording.

Kenneth Alwyn has secured exceptionally good playing from the London Symphony Orchestra ; the woodwind, in particular, shape their phrases most beautifully, and with first-class ensemble... The shaping of the music as a whole is very good, too, with a broad introduction to the Capriccio (making the triplets doubly difficult!), and effective dovetailing of the various tempos both in this piece and in the overture. In every respect, in fact, this is a first-class record.