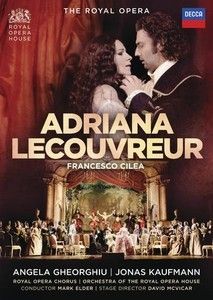 Gheorghiu is an inspired piece of casting for the heroine...There is an excitement about [Kaufmann's] voice and stage presence that is infectious, ...Borodina chews up the scenery, singing with... — MusicWeb International, June 2012 More…

The trio of sublime voices is completed by Russian mezzo-soprano Olga Borodina as Adriana’s jealous rival, the Princess de Bouillon.

David McVicar’s hit production – the first performance of the opera at the Royal Opera House, Covent Garden for more than a century – presents the life of the French actress as a blurring of the distinction between fantasy and reality.

The action revolves around a life-size Baroque Theatre, taking us from the bustle and colour of the first act backstage at the playhouse, to the bare final scenes as the drama reaches its fatal climax.

“Gheorghiu is a dream" (The Independent)

Gheorghiu is an inspired piece of casting for the heroine...There is an excitement about [Kaufmann's] voice and stage presence that is infectious, ...Borodina chews up the scenery, singing with a voice so commanding that it takes you aback...McVicar’s production is another treat, this time for the eyes...All told, then, this set is an absolute winner. It even supersedes Levine’s Sony CDs as an overall first choice for this opera in any format.

McVicar’s beautiful new production makes the strongest case possible for the work: you can almost smell the grease-paint in the theatre scenes, and the high-Classical splendour of sets and costumes is breathtaking. Gheorghiu gives one of the performances of her career...[Kaufmann's] nuanced, ever-responsive acting fares beautifully under the close scrutiny of the camera.