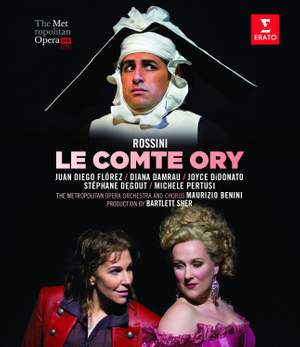 Orchestra and Chorus of the Metropolitan Opera, Maurizio Benini

Sher's production is wise, witty and completely faithful to the spirit of the piece...Damrau is peerless, giving a bravura comic performance made from winks and nudges, heavy theatrical sighing... — BBC Music Magazine, June 2012 More…

Production by Bartlett Sher; recorded in 2011

Le Comte Ory tells the story of a libidinous and cunning nobleman who disguises himself first as a hermit and then as a nun ("Sister Colette") in order to gain access to the virtuous Countess Adele, whose brother is away at the Crusades. The 2011 Met production was directed by the Tony Award-winning Broadway director Bartlett Sher, who in recent years has also staged Il barbiere di Siviglia and Les Contes d'Hoffman for the Met. Sher presented the action as an opera within an opera, updated the action by a few centuries and giving the costume designer, Catherine Zuber, the opportunity to create some particularly extravagant headgear. Juan Diego Florez starred as the title role while Diana Damrau plays his love interest, Countess Adele, and Joyce DiDonato was in breeches as his pageboy Isolier. The trio had appeared in Sher's production of Rossini's Il barbiere di Siviglia.

The New York Times praised "the terrific cast", citing Damrau's "lustrous, agile coloratura soprano voice, and charisma galore" and describing how DiDonato, "who sang with plush sound and impeccable passagework, sent top notes soaring and conveyed all the swagger of a smitten page."

The Financial Times named Florez, "a bel-canto paragon virtually without peer. He attacks and/or floats top tones with laughing ease, phrases with slender grace and exudes charm even when impersonating a singing nun". The Wall Street Journal said: "It was a treat to hear Mr. Florez navigate the vocal extremes of the role, popping out high C's while adopting a rascally but winning demeanor."

Sher's production is wise, witty and completely faithful to the spirit of the piece...Damrau is peerless, giving a bravura comic performance made from winks and nudges, heavy theatrical sighing and a heaving bosom. Rossini's music might have been written for her diamond-bright coloratura and gravity-defying top notes. Joyce DiDonato is equally fine...And who could ask for a more winning Ory than Juan Diego Florez?...Delicious.

Not since Juan Oncina at Glyndebourne in the 1950s has there been a singer better able to cope with the phallocentric Count's stratospheric billings and cooings than Juan Diego Florez. Diana Damrau, a coloratura possessed of breeding as well as presence, makes a superb Countess Adele, and the irrepressible Joyce DiDonato gives a properly testosterone-fuelled performance...Benini directs the Met's Rolls Royce pit band with brisk efficiency.

What a cast the Met has put together!...[Florez is] handsome, sly and tonally easy...[Damrau] acts with just the right oxymoronic ladylike lust...there seems to be nothing [DiDonato's] voice cannot do and she moves as if she owns the stage...Benini managed to keep the many disparate parts together and leads with great consideration for the singers.

The purity and lightness of Flórez’s voice is astounding...If we ever hear another Ory as good as this then I’ll be very surprised... the sheer security of [DiDonato's] tone is a marvel to behold...Damrau has less form in the bel canto repertoire, but she takes to the virtuoso role of the Countess like a duck to water.