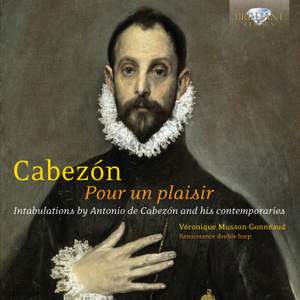 During the mid-16th century in Spain, it became increasingly common for collections of music to include tablature that would enable performers of other polyphonic instruments to perform the repertoire. With the recent addition of chromatic strings, the harp was one such mechanism to benefit from this, and its presentation in this beautifully performed compilation of works offers a fascinating glimpse into the rich world of Iberian Renaissance music making.

The compositions detailed in this recording are taken from three separate sources of the period: books by Mudarra, Venegas de Henestrosa and Antonio de Cabezón. While Mudarra’s work ‘for harp or organ’ is unique in that it’s the closest thing we have to genuine 16th-century harp music, the compilation focuses primarily on the keyboard works of Antonio de Cabezón and includes in tabulations (arrangements of chansons and madrigals originally written by some of the most renowned mid-century composers), dances, variations and tientos – freely composed polyphonic fantasias. Not only does the recording introduce us to the different genres of the period, revealing an instrument that had grown ‘as perfect as the clavichord’, it honours the work of a man who was in fact one of the foremost keyboard performers and composers of his time. Surveying a lesser known facet of one of the most famous periods in music history, this collection is a must-buy for the Renaissance connoisseur.